Although Chinese mainland tech stocks are looking frothy these days, their US-listed counterparts don't have to worry about bubble talk.

Chinese mainland technology stocks are trading at about 220 times earnings per share, the priciest among global peers. When the Nasdaq Composite Index peaked in March 2000, technology companies in the United States had a price-to-earnings ratio of 156.

Brendan Ahern, chief investment officer at Krane Shares, a US-based provider of China-focused exchange-traded funds, said: "If anything, the US names are poised to rally. The Shanghai and Shenzhen Exchanges are up over 90 percent in the last year. We think the US names have probably the biggest catch-up.

"The offshore market continues to attract some of the elite [Chinese] companies, in order to garner an institutional global investor base," Ahern said. "You can make the argument that the very best companies are listed here in the US - Alibaba, JD, VIPshop, etc. The onshore market will institutionalize, and that will change over time."

Many of the 14 Chinese companies that listed in the US in 2014 are in the e-commerce and Internet services sector, including online retailer JD.com, e-commerce giant Alibaba Group Holding Ltd, Chinese microblogging website Weibo Corp, online jobs site Zhaopin Ltd, and online-based leisure-travel company Tuniu Corp.

Tuniu had its IPO at the Nasdaq Stock Market in May, while Zhaopin listed on the NYSE in June; Weibo debuted in April 2014.

JD.com raised $1.78 billion at the Nasdaq in May, and Alibaba garnered $25 billion in a September listing on the New York Stock Exchange. 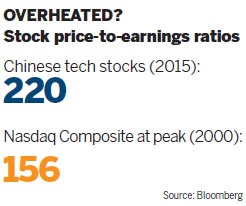 "If you talk bubble risk, you see tens and dozens of companies in the same sector going public, and I don't think that's really happening here [in the US]," said Josef Schuster, founder of Ipox Schuster LLC, a Chicago-based independent financial-services firm specializing in global IPOs. "If there's bubble risk, these are companies that are probably highly valued with no fundamental returns.

"However, if you look at some China-linked deals here in the US, they have fundamental strength, even if they may be slightly overvalued," he said. "Bubbles are there when there's an irrational valuation in stocks, and I don't see it."

Zhaopin's revenue rose 18.7 percent in its most recent financial results. Tuniu reported a loss of $27.1 million, or 54 cents a share, in its fourth quarter. On March 3, JD.com reported earnings per share of 1 cent, beating estimates for a 2-cent loss and flipping a year-earlier 1-cent loss. Alibaba reported revenue of $4.2 billion - an increase of 40% year over year - in January.

Some other companies that have had solid share-price growth in recent years include: Autohome Inc, a car-information website that has gained 204 percent since it IPO price of $17 in December 2013; and online classified ads provider 58.com Inc, which has climbed 274.8 percent since its IPO at $17 in October 2013.

P/E ratios are a company's share price relative to its earnings per share. A stock priced at $10 with earnings of $1 per share has a P/E ratio of 10.

"Chinese technology stocks [listed in China] do resemble the dotcom bubble," said Vincent Chan, the head of China research at Credit Suisse Group AG. "Given stocks [in the US] fell 50 to 70 percent when that bubble burst in 2000, these small-cap Chinese shares may face big corrections."

Teng Bingsheng, of the Cheung Kong Graduate School of Business in Beijing, said: "It's a bubble in the making."

Bloomberg and the AP contributed to this story.