After breaking records at the museum's Costume Institute, China: Through the Looking Glass will be ending its four-month run at the Metropolitan Museum of Art in New York on Labor Day, extending viewing hours for the final Friday and Saturday until midnight.

The China-focused fashion exhibit has drawn more than 735,000 viewers since its opening in May, breaking a previous record held by the Alexander McQueen: Savage Beauty exhibit (661,509 visits in 2011), to become the Costume Institute's most attended exhibition ever. The museum said it expects more than 20,000 additional visitors before the show closes.

"I didn't expect it to be so popular," Andrew Bolton, curator of the Costume Institute and the main person behind the show, told China Daily. "Obviously you want to make an exhibition that appeals to an audience, and we always want to do exhibitions that are timely and relevant in terms of the contemporary audience.

"Fundamentally, the people were really responding to the objects. They're responding to the extent to which China has been an inspiration for the Western fashion designers. I think it's all those factors together, and the fact that China, obviously, is very much on the minds of everyone at the moment. In that respect, it was timely," he said.

The Costume Institute is a collection within the Met that houses more than 35,000 costumes and accessories from the 15th century onward. The exhibition, organized in collaboration with the museum's department of Asian art, celebrated China's centuries-long influence on Western fashion design, featuring 130 pieces of couture fashion juxtaposed with Chinese art, as well as clips from Chinese films.

Chinese director Wong Kar-wai, known for his work on In the Mood for Love and Chungking Express, was the artistic director of the exhibit, which showcased designs from Western fashion houses like Yves Saint Laurent and Balenciaga, as well as Chinese and Chinese-American designers, like Guo Pei and Vivienne Tam.

China: Through the Looking Glass encompasses 30,000 square feet of space in 16 galleries at the Met, making it the institute and the museum's largest special exhibit ever. The large gallery space made it possible to accommodate a high number of visitors without long lines like the Alexander McQueen exhibit had, and just as the museum did for the McQueen exhibit, it will be extending hours to midnight for the final weekend.

A spokeswoman said that 14 percent of the Met's total international visitors this summer were Chinese, compared with 11 percent the previous fiscal year that ended in June, roughly 209,000 of its 6.2 million visitors. The Chinese have been the Met's largest overseas tourist group, and Chinese tour operators, who buy tickets to the Met in advance, have doubled their orders, according to The New York Times.

"Chinese visitors often want to see how China is presented in Western museums," Maxwell K. Hearn, chairman of the museum's department of Asian art and Bolton's collaborator on the show, told the Times.

"From the Chinese audience, it's more pride. It's been an extraordinary, real sense of pride from the Chinese visitors and the Chinese community in terms of their own artistic and cultural heritage," Bolton said of the feedback they had received. "Western audiences, by contrast, are often surprised by the extent and breadth of the influence China has had on the West."

The launch of the exhibition was marked by the annual Costume Institute Gala, a celebrity-studded fundraising event that benefits the Met Museum and the Costume Institute. Numerous Chinese and American celebrities wore pieces in tune with the China theme, which fashion watchers said contributed to the public's interest in the exhibit. Pop star Rihanna wore an elaborate yellow gown designed by Guo Pei, sparking much conversation on social media. 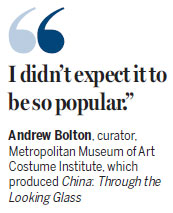 Bolton said he hoped the show would introduce a new way of interpreting the relationship between the East and the West. Now, after close to a million visitors have seen it, he said the show did its job in stirring conversation and debate.

Critics said that the exhibit lacked cultural context, and the designers showcased often cherry-picked parts of China they wanted to represent - committing cultural appropriation in the process - but Bolton said that what the show ultimately did was show that there has always been mutual respect and dialogue between the West and China.

"There's been a conversation, and it hasn't fully been the West looking at China in terms of cultural appropriation," he said. "It's very easy just to sit and look at the influence and go right to the idea of cultural appropriation, but when you do that, and you posit the East - or China in this particular case - as authentic and real, and the Western interpretation as inauthentic or fantastical, there's no conversation to be had."

"It's not just a one-sided conversation. It's two-way. I think people really embraced that and there's been a lot of debate surrounding that. Sometimes good, sometimes bad, but I think an exhibition should be provocative," he said.

It's a boy! DC panda thriving