The Nuclear Security Summit will lead to more US-China dialogue at the highest levels, according to an expert from Harvard University.

"I think there will be a new initiative for deeper cooperation on nuclear security. Following this summit, I expect at the very least an announcement of regular high-level dialogues between the leadership of the US and China regarding nuclear security," said Hui Zhang, a senior research associate for the project on managing the atom at Harvard, on Wednesday at the 2016 NGO Nuclear Security Summit in Washington.

More than 100 experts on nuclear issues met at the summit titled Solutions for a Secure Nuclear Future to propose recommendations for policymakers in Washington.

This year's attendees spent some time discussing a recent development -China's Nuclear Center for Excellence - which opened on March 18 in northeastern part of Beijing. The center underscores China's growing role in the issue of nuclear security. 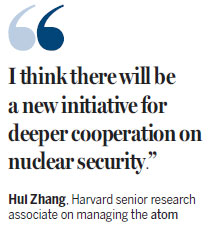 "Having China now take a leadership role along with the US and other countries is absolutely critical," said US Energy Secretary Ernest Moniz at a ceremony in Beijing on March 18 when the center started operation. "This is an absolutely world-class facility, this Center of Excellence."

Experts at the NGO meeting also discussed recent terrorist attacks in Belgium, Turkey, and France as examples of why securing devastating nuclear materials is imperative.

Corey Hinderstein, senior coordinator of the Nuclear Security Summit and of nonproliferation policy affairs at the US Energy Department, said: "Nuclear security has never been more important. And thank goodness we have never been more equipped as a community to deal with it."

Harvard's Zhang believes that recent developments in the Chinese economy are beneficial.

He referred to the Belt Road Initiative, a project to build infrastructure in Central Asian and Eastern European countries. The goal is primarily to promote trade in the region.

"Along the belt, there are some countries that are interested in buying China's nuclear reactors. They have a lack of infrastructure to deal with this technology, so the Beijing Center of Excellence could potentially provide them with training and resources," Zhang said.

Allan Fong in Washington contributed to this story.