Concerns grow over frequent spying by Washington near Chinese coast

China and the United States will hold a working group meeting this week to discuss a military security code of conduct covering international waters and airspace, the Ministry of National Defense told China Daily on Tuesday.

Further concerns have been raised over frequent spying by the US along China's coastline after a "close encounter" last week between a Chinese navy fighter jet and a US Navy reconnaissance plane.

The incident happened about 200 km from the Chinese coast.

Observers said a code of conduct is needed to avoid friction between the two countries, but no major progress will be made until Washington stops conducting airspace espionage near Chinese territory.

The ministry said that under the consensus reached between China and the US in July, Beijing has sent a delegation to the US, from Monday to Friday, to attend the working group meeting regarding consultations on the code of conduct.

"This is part of the annual plan for China-US military exchanges, aimed at implementing the consensus reached by the leaders of the two countries and boosting the establishment of a China-US military security code of conduct regarding international waters and airspace," the ministry said.

Jin Canrong, a professor of international relations at Renmin University of China, said the start of talks on the code of conduct is a hopeful sign for "avoiding unexpected military conflicts" on the high seas when the two countries try to safeguard their own interests.

Jin said the development is "unlikely to see either side abandon its existing pattern of practices", but drawing a red line is at least "necessary and helpful".

President Xi Jinping and his US counterpart Barack Obama met on the sidelines of the 3rd Nuclear Security Summit in March. They agreed on the early formulation of the code of conduct as well as establishing a system for mutual notification of major military activities. 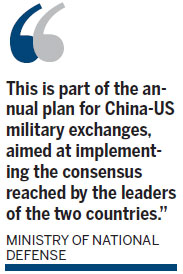 In early July, the two countries completed the sixth round of the Strategic and Economic Dialogue in Beijing and vowed to further strengthen consultations on drawing up the code of conduct.

Zhang Junshe, deputy head of the PLA Naval Research Institute, said an explanation from Washington is still awaited over its frequent "in-close" reconnaissance despite the fact that the US has long claimed its "pivot to Asia Pacific" strategy is not aimed against China.

After last week's airspace encounter with China, Washington has refused to admit that sending a spy plane to waters only 200 km from the Chinese coast is "in-close reconnaissance".

Yang Yujun, spokesman for China's Ministry of National Defense, said on Saturday that a PLA Navy J-11 fighter jet took off to conduct routine identification and verification work on Aug 19 as US Navy P-3 and P-8 planes were conducting reconnaissance about 220 km from Hainan Island.

Yang said the US accusations against China are groundless, adding, "The US' large-scale, frequent and close reconnaissance is the real source of air safety concerns and possible accidents."