The US may have run out of EB-5 investor visas for Chinese applicants for the first time ever, but experts say it should have little effect on those wanting to apply.

The State Department announced that the maximum number of EB-5 applicants from China had been reached for fiscal year 2014 on Aug 23, and the next availabilities would not come until the start of fiscal year 2015, which is Oct 1, 2014.

"So essentially we only have a month where the EB-5 visas for Chinese nationals are not going to be available," said Nataliya Rymer, an associate at Greenberg Traurig LLP who works on business immigration. "That's a pretty short period of time. After that, the availability comes back and everything starts functioning as it did."

The EB-5 program, also known as the investor-immigration program, allots 10,000 visas to foreigners every year who seek residency in the US either through investing at least $500,000 in US projects that create at least 10 self-sustaining, fulltime jobs for Americans. Applicants who are given the visas can acquire permanent residency status with their family members.

A country is allotted 7 percent of the available visas annually, but if a country's quota is not met, remaining slots are given to applicants from other countries, and Chinese demand has been surging.

Chinese applicants who have already been scheduled for an interview with the US consulate for EB-5 visas before the September cut-off date will not be impacted, but "no additional numbers are available" to those who are just putting in a request, according to state department official Charles Oppenheim, chief of the immigrant visa control and reporting division. 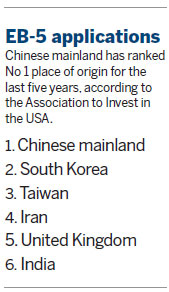 Those who are eligible for visas for the 2014 fiscal year are still going to get their visas, according to Martin Lawler, an immigration lawyer based in San Francisco. "The EB-5 is not closed, it's open for business," Lawler said.

"The people who are going to get the remainder of the 2014 numbers are people who applied a year ago, or six months ago, or a year and a half ago," he told China Daily. "And those people who could possibly be scheduled - and they can only schedule so many people in the American consulate in Guangzhou - are going to all get visas if they are eligible."

The State Department also said it predicts that slots for visas for the next fiscal year may reach the quota by May, which will create a backlog.

Currently, applicants typically have to wait a year to be scheduled for an interview with the US Embassy in Guangzhou for permanent residency, and the wait may get longer in the coming year, experts said.

"Such a long backlog in the long-term is going to cause problems both for investors and US companies that are looking for EB-5 money to start or even finish some of the projects," said Scott Bettridge, an immigration lawyer at Akerman LLP. "I think it's going to cause investors to look at EB-5 a little differently from a business or even a family perspective."

"The whole program has really taken off in the last two years," Lawler said. "A few years ago, there were only 1,000 EB-5 applicants or so. This year, they're going to use all 10,000 numbers. A few years ago, we'd never thought we'd see this day. I have a whole staff of people that deal with it and can speak Chinese and we file a couple a week."