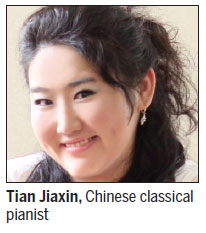 Chinese classical pianist Tian Jiaxin, 28, has added a new feather to her cap in a career that has the music world predicting ever greater things.

At New York City's fabled Steinway Hall on Wednesday, she was inducted into the ranks of the Steinway Artists, joining a list of some of the best pianists in the world.

Tian said the success of the yearlong eligibility evaluation has brought her one step closer to her dream of performing on stages around the world.

"The name Steinway holds special meaning for me," she said. "For every concert I perform, only Steinway can make each of my performances better and help me harvest more variation from each sound and rhythm."

"Steinway is a bridge that connects me with the audience, which can only be done right with a Steinway," she said.

To become a Steinway Artist, a pianist must not only own a Steinway piano, but also meet professional criteria and standards.

For Tian, after the panel of judges from Steinway & Sons reviewed her profile, she was given a face-to-face interview early this year. Steinway then sent critics to evaluate her solo recital at Lincoln Center in February.

Today, more than 1,600 world-class pianists bear the title Steinway Artist, which means that they voluntarily endorse Steinway & Sons by playing Steinways exclusively. In return, Steinway Artists are provided with access to the Concert and Artist Piano Bank.

Well-known Chinese pianists Lang Lang and Li Yundi are on the Steinway Artists list. The program is not limited to Classical musicians. Popular performers like Billy Joel, Harry Connick, Jr and Bruce Hornsby are also members.

Born into a family of professional musicians in Beijing in 1986, Tian Jiaxin started to learn piano at the age of three at Beijing's Central Conservatory of Music, under the guidance of Professor Peiying Huang.

After graduating from Shenyang Conservatory of Music, Tian came to the US on a scholarship to study at the Manhattan School of Music in 2010 under faculty member and critically acclaimed pianist Jeffrey Cohen, who called her "a special pianist - a true virtuoso with a magnetic stage presence who is also a thoughtful musician of artistic expression and sensibility. She is a tour de force and I predict a great future ahead for her musical career".

On Tian's performance schedule is a new song, Chinese Dream, which was written by Chinese composer Zhang Chao to celebrate China's National Day (Oct 1) in Beijing on Sept 26.