A humble repair shop in Fremont, California, owned by a Chinese American is now hosting a special exhibition containing historical relics from World War II to help preserve the history of the Japanese invasion of China.

Liu Lei, a Chinese collector and the owner of the shop, displayed his 400 relics, most of which are swords and guns used by Japanese invaders in China during WWII.

"All relics showed today were collected by myself from countries all around the world during the last 20 years," Liu told China Daily on Thursday, adding that the total value of these relics may be equivalent to the price of two houses in the San Francisco area.

Liu is holding this exhibition to provide audiences a more concrete understanding about the war and the sad history behind it which, according to Liu, should not be forgotten. 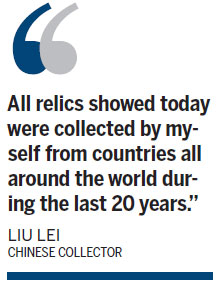 "This is my first time to see so many weapons used by the Japanese army during the war," said Betty Yuan, a community leader in the San Francisco area.

Every one of the relics could serve as evidence on the grave crimes committed by the Japanese militarists on the Chinese people during the World War II. Japan cannot distort the history in front of these historical relics and documents, said Yuan, adding that she respects Liu's effort to collect and protect the historical works.

A giant battle map hanging on the wall attracted a lot of attention. "The map was used by senior Japanese military officers in China during WWII," said Liu. He said he bought the map from an American collector who preserved it over several decades.

"In front of these documents, how could the Japanese dispute the history of the Nanjing massacre?" asked Liu.

Liu emigrated from Shandong to the Bay Area in 2001, and currently operates two repair stores with his wife.