China's rising volunteerism was celebrated at the 2014 Points of Lights Tribute Awards gala Wednesday evening at the Chinese Embassy in Washington.

As the founder of Points of Light, which is said to be the largest organization in the world dedicated to volunteer service, former US president George H.W. Bush sent a thank-you note to Chinese ambassador Cui Tiankai for his help in promoting global volunteerism.

"It brings me joy that volunteerism is on the rise in the organizations throughout China that react to natural disasters, help with rural education, work with the elderly, and do countless other good works," stated the letter, which was read by Neil Bush, son of the president and chairman of Points of Light.

"My father cares so deeply about the promotion of volunteer service and the promotion of closer ties to China," said Neil Bush. "Being able to celebrate volunteerism in this building is such a tribute to his life and legacy." 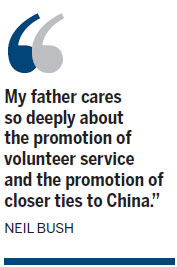 "Volunteerism is no stranger to the Chinese people," said Chinese ambassador Cui Tiankai.

In the past 20 years, volunteering is growing by leaps and bounds in China."

Yao's foundation has worked to improve the lives of children in China and the US and made an effort to preserve wildlife in Africa among many other initiatives.

Charles Orgbon III, an 18-year-old environmentalist from Atlanta who started a club six years ago to keep his school clean then turned it into Greening Forward, also was honored. His organization is a nonprofit dedicated to creating a diverse global environmental movement powered by young people.

HP was saluted for its commitment to matching donations from its employees, which resulted in more than $13.3 million to nonprofits and schools through cash and product donations in 2013.

World Central Kitchen was feted for its effort in feeding vulnerable people in humanitarian crises around the world, led by its founder, international chef Jos Andrs.

Points of Light was established in 1990 and got its name from President Bush's inaugural address in which he said: "I have spoken of a thousand points of light, of all the community organizations that are spread like stars throughout the nation, doing good."

Yue-Sai Kan, a Chinese-American Emmy-winning television host and producer and owner of Yue-Sai Cosmetics, was a presenter. The celebrity-filled event also featured the auctioning off of the former president's socks that he wore while skydiving on his 90th birthday.

Cui said there are now more than 40 million trained and registered young volunteers in China, and they provided 690 million hours of volunteer services in 2013, citing data released by Chinese Young Volunteers Association.

The organization now has affiliates in 250 cities in 30 countries, including Beijing, Hong Kong, Chengdu and Shanghai.

"Just imagine what 1.3 billion points of light would look like and what hope and opportunities, care and friendship that will bring," said ambassador Cui, referring to the rising volunteerism in China.

China firm to build cars for subway in Boston