Chinese companies with eco-friendly products should see a boost due to the government's increased focus on the environment.

"All are thinking that China will put more emphasis on anti-pollution policy and regulations, which means there will be a very big market for our business," Yulong Zhu, CEO of Yulong Eco-Materials Ltd, told China Daily in a Wednesday interview.

Yulong produces fly-ash bricks and concrete in and around Pingdingshan - a city of nearly 5 million people in Henan province - where the company is based.

"The government has also expressed that it's going to increase the speed of urbanization, which will give the whole construction market a big stimulus too," Zhu said.

Yulong is also preparing an initial public offering on the Nasdaq Stock Market in New York. 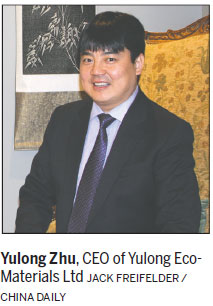 Zhu said he started working in construction in the 1990s, in the steel and cement industries. Soon he began investing in the manufacturing of construction materials, like concrete, before forming Yulong Eco-Materials in the early 2000s.

"I started thinking of my recycling business from the other ways people made bricks and concrete," Zhu said through a translator. "There was a lot of construction waste and a lot of materials: crushed stone, sand, etc. I was just thinking of how to reutilize these things."

Innovation would come from Zhu's epiphany, and it manifested itself in the fly-ash bricks.

The bricks are said to contain at least 30 percent reclaimed material, instead of traditional cement, which reduces costs and energy input in the manufacturing process, Zhu said.

"Once we bake the bricks, we need steam, and either we use coal or diesel," Zhu said. "Fly-ash bricks are eco-friendly bricks because it's using the fly ash, which is the residuals from burning coal.

"Developers tend to buy eco-friendly products, so there's a general trend," Zhu said. "This business doesn't have any bottleneck in terms of environmental policy, so basically the government has encouraged us."

Yulong, which controls nearly 51% of the brick market and 30% of the concrete market in Pingdingshan, according to company data, employs about 250 people through Yulong Concrete and Yulong Brick - founded in 2004 and 2006, respectively.

The privately held company reported $44.5 million in revenue for the year ended June 30, 2014, an increase of 4.7 percent, according to financial documents filed with the US Securities and Exchange Commission. Net income for the year grew 6.4 percent to $10.8 million.

"The reason we chose a US market is because it increases the company's whole image," Zhu said. "The setting also gives companies an opportunity to learn more about an international way of operating."

The company has not released a timeline for the IPO.

In the meantime, Zhu said the company is "building up" its business model with the goal of expanding the recycling technology to other cities already using the production model as a prototype.

New production plants that will handle the recycling of construction waste and increased brick production also are in the works and set to open soon, Zhu said.

Elected officials from cities in Henan province and elsewhere already have visited the facilities in Pingdingshan, Zhu said.

"The provincial level government in Henan thinks this is a very important project," he said. "It is a problem in every city in China, so there's going to be a very huge market for us to grow."

Nearly 55 percent of China's population lived in urban areas by the end of 2014.