Jin Liqun, president of the Asian Infrastructure Investment Bank, made his first appearance on the Time 100 list of the most influential people in the "American world".

"With his strong personality and leadership, he is quickly forging AIIB into an effective development bank, working cooperatively with other multilateral institutions like the World Bank and the Asian Development Bank, showing that one can combine high-lending standards with effective development," Nobel Prize-winning economist Joseph Stiglitz wrote of Jin.

"Going forward, one can anticipate that AIIB will demonstrate that governance matters: With control in the hands of emerging markets, and especially China, lending will be different from that of established institutions, like the World Bank, controlled by advanced countries, and especially the US," Stiglitz said.

In an interview published in the weekend edition of the Financial Times, Jin said the bank isn't "trying to upend the international financial and economic order, even though it leaves much room for improvement."

Jin also said that although China is the bank's biggest shareholder, "it is only one shareholder and I can tell you the bank will not do anything that is driven by politics, and will not interfere in political affairs". 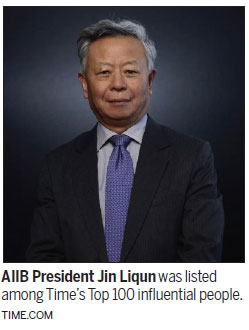 Jin said the bank offers China an opportunity "to show it can work with other countries and to [better] international practice - not just Western practice - so people can be convinced China is a force for peace and prosperity in the world."

"The Chinese experience illustrates that infrastructure investment paves the way for broad-based economic social development, and poverty alleviation comes as a natural consequence of that," he said. "We want to create something new that combines the strong features of private companies with those of multilateral development banks."

Tom Frieden, director of the US Centers for Disease Control and Prevention, praised the vital work of Tu, who also made the list for the first time.

"It is one thing to discover a folk remedy and quite another to find its medically active agent and turn it into a modern drug," Frieden said. "When boiling failed to extract an effective antimalaria ingredient from the herb, it was Tu who remembered a millennium-old recipe she'd copied in her notebook - one that called for soaking, not boiling, the herb. The ancient recipe turned out to hold the key: Tu found that the active compound, now known as artemisinin, is destroyed by high heat."