Alipay brings the frenzy of Black Friday to China

A group of high-end retailers in the United States have teamed up with Alipay, which will enable online shoppers in China to purchase goods through Alipay's ePass. Alipay is China's largest third-party payment service.

Alibaba received 278 million orders totaling $9.34 billion during the Singles Day shopping holiday on Nov 11. Alipay, Taobao and Tmall Global have been working to get Chinese consumers a piece of the action on Black Friday, Alipay said on Wednesday.

"Alipay is delighted to partner with Borderfree and Shoprunner to help leading US retailers introduce Black Friday to China and reach out to eager new customers through well-managed localized promotions, direct marketing and social media campaigns," said Rebecca Lui, director of marketing and public relations for Alipay US.

Black Friday, Nov 28 this year, is the day after Thanksgiving in the United States. It is called that because it is considered the day that retailers go "into the black" financially on their balance sheets. It is also the day that unofficially opens the Christmas holiday shopping season. 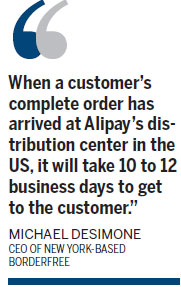 In addition to getting a merchandise checkout in Chinese, consumers who use Alipay to buy can access delivery services in China through the China Smart Logistics (Cainiao) Network for participating US merchants.

"When a customer's complete order has arrived at Alipay's distribution center in the US, it will take 10 to 12 business days to get to the customer," said Michael DeSimone, CEO of New York-based Borderfree, which describes itself as a "leader in cross-border ecommerce services, enabling retailers and brands to easily market and sell to consumers in every corner of the globe".

DeSimone said there is no US tax included in the order, but there is a fee for shipping and duties. The retailers and Alipay will run a number of promotions geared to Chinese consumers, including "red envelope" (coupon) deals, which have proven successful for Alibaba in China for connecting with Chinese shoppers, he said.

Alipay said it would issue a limited number of red envelopes in denominations worth 500 yuan via multiple channels, including eTao and G.Taoboa. Shoppers who secure one can then store it in their Alipay accounts.

Alipay also will give shoppers an extra 20 yuan digital red envelope when they share the Black Friday promotion with friends and family via Weibo or other social media channels.

"This year, the holiday-season program connecting Borderfree's global e-commerce platform to the Alipay ePass solution will help drive much greater visibility for participating retailers in China, while providing a more familiar and seamless experience for Chinese consumers who know Alipay as one of the most trusted payment-providers in their home market," said DeSimone.

Macy's and Bloomingdale's have expressed enthusiasm for reaching out to Chinese online shoppers, he said.

"With a quickly-evolving consumer market and a growing base of sophisticated shoppers, China is a key part of our international ecommerce strategy," Kent Anderson, president of Macys.com, said in a Borderfree statement.

"We see this pilot from Borderfree and Alipay as a compelling way to overcome barriers that have made breaking into this market particularly challenging, and provide consumers with a straightforward, localized shopping experience," he said.

DeSimone said that after the pilot program, Borderfree will look to expand the service to the other 175 brands on its platform and collaborate with the wider Alibaba Group in the future.