A new language of the real estate deal

Niu, the owner of a factory that supports a chain of clothing stores in his hometown in Fujian province, is looking in New York City for a second home, and he's willing to pay as much as $3.5 million for it.

Although he can barely speak English, Niu - he asked that his full name not be used - needn't worry that the language barrier could impede a deal.

That's because brokers who aren't native Chinese speakers can take a course, Mandarin for Real Estate Professionals, starting next month at New York University's School of Continuing and Professional Studies.

Milena Savova, who directs the school's Department of Foreign Languages, Translation and Interpreting, said she planned to launch such a class after reading a New York Times article in September about real estate agents learning Chinese "because they have so many high-end Chinese clients in New York," Savova explained.

"I thought that it would make an interesting course."

The 12-week course, which begins on Feb 6, is for beginners in Mandarin. The goal is to help real estate professionals communicate with Chinese clients.

The course also will inform students about customs in real estate transactions, expectations in living standards, the relationship between buyer and seller, and the role of the broker as intermediary.

According to Savova, finding a course textbook has been a challenge, since NYU is the first institution to offer this kind of course in New York.

The educator said she would scour materials and cull the best ones for the course, based on input from experts in Chinese culture and real estate.

Participants will learn about Chinese culture and how feng shui influences buyers' decision-making. They will role-play the stages of a transaction - showings, open houses and closings, and related scenarios. The course will familiarize students with greetings, exchanges of courtesies and customs useful to real estate deal-making.

Having the ability to speak Chinese is "one of my advantages," said Kathy Tsao, a New York agent for 16 years and the chairwoman of the Asia Real Estate Association of America. She said she thinks the course helps non-Chinese-speaking brokers to "understand the culture".

Clients from China have become the second-biggest group of foreign buyers in the US residential property market, surpassed only by Canadians, according to the National Association of Realtors. Chinese buyers accounted for $7.4 billion of sales during the 12 months ended in March 2012, up 24 percent from the year-earlier period.

Also, Chinese buyers spent $1.71 billion on commercial property in the US during the most recent period for which data are available.

According to the Hurun Report, a Shanghai-based magazine known for its rankings of China's richest people, the Chinese mainland has almost 1 million millionaires, and nearly half say they want to invest in the US.

The wealth explosion in China has led many of its affluent citizens to diversify their assets with real estate in the US. Their reasons for buying vary. Some do so in anticipation of their children studying at US institutions, while others take the plunge because of immigration or business purposes.

Tsao acknowledged New York's status as a high-priced property market. But compared to big, expensive Chinese cities like Beijing and Shanghai, and considering that US inflation has been held in check for several years, New York can present good value to investors. Many wealthy Chinese find that buying here is a means of wealth preservation, the agent explained.

Zhang Qi, a 28-year-old Beijing native who came to the US in 2007 to study, is currently working at a New York consulting firm. He pointed out that policies in China prevent second-home purchases, to prevent overheating in the housing market.

"If you already have a piece of property in Beijing, the policy doesn't support your purchase of a second one," Zhang said.

"The purchase-limit policy in China is to control and cool down the real estate market," he said, though it has also sparked a "crazy" jump in housing prices.

According to Tsao, the key to doing business with Chinese clients is understanding their needs and providing good service.

"If (Chinese buyers) are happy with your service, they will introduce their friends to you for more purchases in the future," Tsao said. 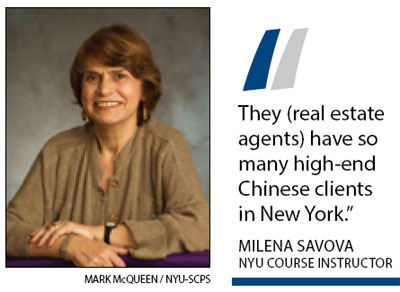 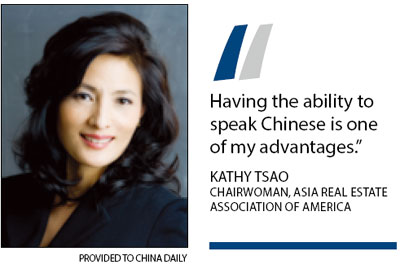