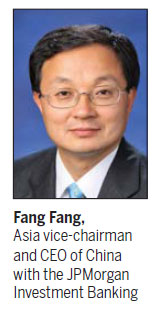 This year should see a strong rise in the number of Chinese companies seeking to raise funds overseas through dollar-denominated corporate bonds, according to Fang Fang, the Asia vice-chairman and CEO of China with the JPMorgan Investment Banking.

He is also expecting a significant pick-up in IPO activity, as Chinese companies look to fund their expansions, particularly those in the real estate sector.

Fang said 2013 will be a "good and active year" for overseas corporate bond issuance by Chinese enterprises looking to raise money, in what has become a tighter market at home for loans.

"Foreign investor worries about any Chinese economic hard-landing were removed at the end of 2012, and they are now expecting faster year-on-year GDP growth of more than 8 percent in 2013, which has increased investment confidence," said Fang.

Fueled by an easing in global monetary policy, the dollar bond market has been getting active, he added.

Fang said that with the US Federal Reserve announcing that it will continue with near zero percent short-term interest rates - they have been between zero to 0.25 percent for several years - fixed-income investment products from emerging markets, especially from China, will become much more attractive to global investors.

"The demand for both high grade issuers and the high yield ones was very strong in January," he said.

"Bond interests rates are at historic lows because of the excessive liquidity of the dollar on the market," he added.

Interest in overseas dollar bond issues has been especially strong from companies in the real estate sector, said Fang.

"Over the past two years, it was tough for property developers to raise funds in the domestic financial market because of strong property control policies. So the dollar bond market is becoming favorable."

Another trend, he said, has been for Chinese companies to immediately convert US dollars into yuan once the bonds have been issued, and then invest the Chinese currency in the domestic market, in anticipation of further appreciation against the dollar.

He added, however, that the window of opportunity is already tightening for dollar bond issues, after that surged in January

"The US bond market has started to slow, with supply outstripping demand, and it has also cooled trading in the secondary market. However the market is not closed, investors are simply more selective now, which means the market is becoming more balanced."

Fang added that there will be a number of large IPOs launched in Hong Kong starting in the second quarter of this year, and that market will certainly be brighter than it was in 2012.

Last year, Hong Kong was the largest market for mainland company IPOs, raising 63.16 billion yuan for 58 enterprises, although that was still a 44 percent drop compared with 2011.

However, Fang didn't see any likely rebound in interest in Chinese companies from the US market, which hosted just two Chinese company IPOs in 2012, after a wave of short selling and a tightening in regulations by the US Securities and Exchange Commission.

"The US stock market has not yet turned warm when it comes to Chinese companies, it's on the way to recovery, but we have to find a large size IPO that can perform really well in the after market in order to truly revive that market," Fang said.