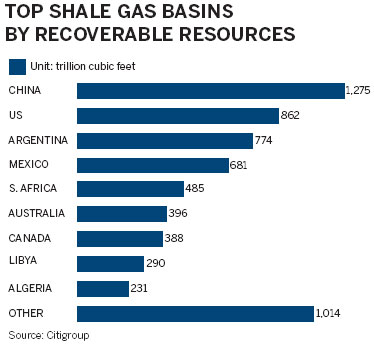 Aware of the transformative power of shale gas in the US, China is taking steps to incorporate 'unconventional' sources in its energy mix, China Daily's Joseph Boris reports.

The word "game-changer" gets batted around with abandon, but the phrase aptly describes the United States' shifting energy landscape.

A potent mix of reduced demand, technological upgrades including fuel efficiency and - most importantly - rock-encased stores of natural gas that were once either undiscovered or deemed unreachable, has put the US on a path to independence from petroleum imports.

If gas were to supplant smog-inducing coal for energy, improvement in China's air quality would be a major side benefit. But along with its energy profile, China could see relations with the rest of the world, including resource-rich allies and rivals of the US, undergo a dramatic overhaul.

A few other countries - Canada, Brazil, Argentina, Poland, Algeria and Australia - have large amounts of gas locked in underground formations of shale, a light sedimentary rock. But the US, due to long experience with shale-specific extraction methods, has been most aggressive in drilling.

"The economic consequences from this supply and demand revolution are potentially extraordinary," oil analysts from Citigroup Inc concluded in a March 2012 report that dubbed North America "the new Middle East".

Citi's report, citing shale among factors including reduced demand, new fuel-efficiency standards and technology, noted the US has become a net exporter of petroleum products for the first time since 1949. It projected a possible increase of up to 3.3 percent to the country's economy, whose "potential reindustrialization is both profound and timely, occurring as the US struggles to shake off the lingering effects of the 2008 financial crisis".

China could realize an even greater impact from shale gas - but that prognosis contains plenty of caveats.

China has what is believed to be the world's largest deposits of recoverable shale gas, officially estimated at 36.1 trillion cubic meters. Getting that gas out of the ground poses technical, geological, financial and environmental challenges that aren't likely to be overcome soon.

"Hydrocarbons very much dominate the energy mix in China. I think it will still be so in the future, simply because coal accounts for a major part - almost 70 percent - of the energy total. I don't think this can be reduced very soon successfully in the near future," said Xu Xiaojie, an expert on energy diplomacy at the Chinese Academy of Social Sciences in Beijing. He spoke at a recent energy forum at the Asia Society in New York.

Xu, head of global energy research at the institute and a top researcher at China National Petroleum Corp, and other experts stress that development of Chinese shale-gas reserves is in its infancy. It's impossible to predict when China will have at its disposal the technical and managerial expertise to maximize the use of this abundant resource.

Last year, the Chinese government set a domestic production target of 6.5 billion cubic meters of shale gas annually by 2015, and between 60 billion and 100 bcm a year by 2020. It has a long way to go to meet those ambitious goals, partly because the use of shale and other "unconventional" reserves will be required.

Challenges to large-scale commercial shale development include complex geology and topography, a lack of domestically available know-how and technology, limited pipelines and related infrastructure around remote shale deposits, and the need to divert huge quantities of water for hydraulic fracturing, or "fracking" - the drilling method through which underground shale and the gas inside are blasted apart at high speed by several million liters of a sand- and chemical-infused mixture.

Although China's output of natural gas overall rose 6.7 percent last year from 2011, almost none of the production was from shale. According to Xu, there are now about 60 shale wells operating in the country, though most of these are in early-stage testing while only a few are actively pumping.

"There are pilot projects, but it's just a start," Xu said. "We haven't figured out which way to develop this; we're still learning. We see the shale-gas revolution in the US, and we get a sense of what is possible."

On the auction block

Despite the challenges, China presents competitive advantages in production of gas from shale and other unconventional sources, namely low costs for drilling and domestic gas prices that have tended to exceed those in ultra-low North America, experts say.

In November, China's Finance Ministry said the government would pay 0.4 yuan (6 US cents) to shale developers for every cubic meter of gas produced between 2012 and 2015.

In late 2011, the government began a price-liberalization pilot program in two southern areas of the country - the Guangxi Zhuang autonomous region and part of Guangdong province - to more closely align retail prices for gas with those on international markets.

The Ministry of Land and Resources recently announced, in the second Chinese auction of its kind, the awarding of 19 shale-gas blocks to 16 companies, two of them privately owned. The area covered by the licenses is about 20,000 square kilometers, and the investment to explore the blocks will total 12.8 billion yuan over three years.

Without giving a timetable, the ministry's head of geological exploration said China will continue opening its shale gas market to future tenders. "We welcome all kinds of participants, such as private and joint ventures, to join in shale-gas exploration," Peng Qiming told reporters after the Jan 21 announcement.

That was the first shale-gas auction in which non-Chinese companies were allowed to participate, as minority partners in joint-venture bids with domestic firms. No foreign-financed JVs, however, were among the second-round winners, according to the ministry. The first auction, in June 2011, was limited to state-owned enterprises.

A few foreign companies with exploration licenses previously issued by the resources ministry are engaged in searching for shale gas with one of China's three NOCs.

Royal Dutch Shell PLC of the UK and US-based Chevron Corp are, respectively, working with China Petrochemical Corp (Sinopec Group) and China National Offshore Oil Corp (Cnooc Ltd) by providing technology and expertise in shale-gas development. In December, Sinopec announced a two-year agreement with ConocoPhillips to explore nearly 4,000 square kilometers of the southwestern Sichuan Basin, one of China's two reservoirs of shale gas and more accessible than the other - the craggy, water-depleted Tarim Basin in the northwest.

The third Chinese major, China National Petroleum Corp, owns exploration rights to most of the country's shale deposits. With Shell, CNPC signed the country's first shale production-sharing agreement but has done only limited exploration in the Sichuan Basin, due to high costs and a lack of specialized equipment.

"For now, it seems Chinese companies' strategies are focused on gaining domestic acreage, learning from abroad through partnership and acquisition, and waiting until the domestic price-control regime becomes favorable," Citigroup analyst Lee said.

International companies in the Chinese sector, energy producers as well as field service providers, are in "a long game" that promises opportunities down the line, even if prices in China aren't as high as they would like, he explained.

"This is the advent of a new unconventional reserve," said Sue Xu Zhang, managing partner at Aurora Investment Group in New York. "Just as this has transformed the market in the US, making it less dependent on foreign sources of energy, with significant development in China and the limited supply [of recoverable gas from shale elsewhere] you can see the scale increasing down the road."

Xu, the oil executive-turned-scholar, gives a clue to his cautious view by using "resources" rather than "reserves" to describe Chinese shale gas-conveying that commercially viable extraction is far from certain. He said the country must determine the amount and pace of production that would make economic sense, and how shale figures into the nation's energy needs over the very long term.

China, he said, could treat shale gas as a "bridge fuel" that helps it transition from coal and petroleum toward its ultimate goal: reliance on renewable forms of energy. The government has targeted increasing the share of non-fossil-fuel energy to 15 percent of the country's total consumption by 2020 and 30 percent by 2050.

Shale-gas deals between the US and China aren't flowing one way. Sinochem Group, a chemical producer with sizable energy assets, announced on Jan 30 an agreement to buy, from Pioneer Natural Resources Co, a 40 percent stake in western Texas' Wolfcamp field for $1.7 billion.

Sinochem said it will pay $500 million in cash to explore 33,500 hectares and the remaining $1.2 billion by taking on Pioneer's share of future drilling and upkeep.

Last year, Sinopec agreed to buy $2.5 billion worth of shale-gas assets in Ohio, Michigan and other areas from Devon Energy Corp. That followed CNOOC's $2.2 billion purchase in 2010 of assets owned by Oklahoma-based Chesapeake Energy Corp and a smaller acquisition in 2011.

It doesn't involve shale, but CNOOC last year made not only a bold move into North America's unconventional petroleum resources but also the biggest deal of any kind on the continent by a Chinese company. The NOC agreed to pay $15.1 billion for Nexen Inc, a Calgary-based company that, in addition to drilling in the North Sea and elsewhere, produces oil in western Canada's tar sands.

The CNOOC-Nexen deal illustrates how the pursuit of petroleum and countries' external relations intertwine. China, which in 2010 imported more than half the oil, is diversifying its energy portfolio. Short of achieving self-sustainability through renewables, China, like other major powers, covets reliable energy supplies and can't afford to be choosy about their origins.

Although American energy companies do business with oil-exporting nations that are well outside Washington's sphere of friends, the government has tried at times to steer partners, including China, away from deals with those the US deems undesirable, such as sanctions-hit Iran and Sudan.

When it comes to global energy, bilateral diplomacy often becomes a three-sided affair. One country's partner is another's "pariah", said David Zweig, associate dean of humanities and social science at the Hong Kong University of Science and Technology.

Even after diversifying its supply of oil - still the king of all energy-to more secure sources such as Russia, Brazil and Australia, China remains so dependent on imports that concerns over energy security go hand in hand with economic development.

"You can say that to the Chinese over and over that this [oil] is fungible, but first of all, they're convinced that they've got to buy stakes, they've got to get into fields and they want to expand their own companies, and the way they're going to do that is not by just buying on the market but by going into countries, developing," Zweig said at the same Asia Society forum on "triangularized" China-US energy relations where Xu spoke.

"I think that sometimes China thinks that the US is trying to contain it, but yet in many cases the United States is more than glad to see China go out and expand the supply in the world. It's a public good, and the more energy there is, the less tension there actually is," the Canadian academic said.

While there exists the prospect of increased US-China tension in competing for energy, that outcome isn't inevitable, according to Zweig.

He believes the relationship has the potential to remain calm, along a continuum he identifies as "cooperate-compete-conflict".

For one thing, countries that the US, in Zweig's formulation, considers "neutral" oil producers - with no expressly anti-American, anti-Western or anti-capitalist agenda - including Russia, Brazil, Nigeria and Vietnam are expected to account for up to three-quarters of new oil production in coming decades. For another, the share of oil that China imports from US allies is predicted to rise from the current 41 percent, due to closer Chinese-Canadian cooperation in energy, including the gas-rich tar sands of Alberta.

"On the question of shale," Zweig said, "the American companies and the American government are more than glad to see China develop shale, because it will mean a less needy China for oil."