US says trade talks are ajar for China 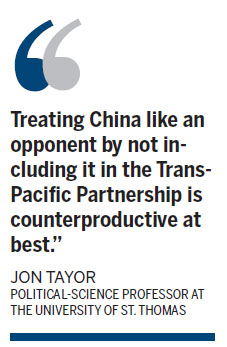 The United States remains open to including China in a Pacific free-trade zone, Washington's top trade official said less than a week after Japan asked to join the negotiations.

Acting US Trade Representative Demetrios Marantis said on Wednesday that it's up to China if the country wants to join the TPP talks and satisfy the 11 nations now engaged that it could live up to the pact's requirements.

"Whether it's China, whether it's the Philippines, whether it's Thailand ... it's incumbent upon those economies to be able to convince the other TPP partners that they are capable of meeting the high standards that we're negotiating," Marantis told reporters from foreign media outlets at a briefing on the US trade agenda for 2013.

Asked about the Japanese bid to join the TPP talks, a spokesman for China's Ministry of Commerce, Shen Danyang, said on Tuesday that Beijing is open to all efforts to promote regional economic integration. Each economy has the right to choose a path to integration based on its own conditions and development, he said.

China, Shen said, will keep communicating with parties in all those efforts while promoting its own free-trade negotiations. The Chinese mainland has free-trade pacts with 10 economies including the Association of Southeast Asian Nations, New Zealand, Hong Kong and Taiwan and is talking with six others, including Australia. China has also emphasized its ongoing talks to create a three-way free-trade zone with Japan and South Korea.

The US is in talks with Australia, Brunei, Canada, Chile, Malaysia, Mexico, New Zealand, Peru, Singapore and Vietnam to form the TPP. Their 16th round of talks concluded last week in Singapore.

On Friday in Tokyo, Prime Minister Shinzo Abe announced that Japan would join the negotiations, calling it a "last chance" for his country to help craft new regional trade rules and reverse decades of economic weakness. The bid by the world's No 3 economic power is subject to approval by the 11 current TPP negotiators.

"For Japan to remain inward-looking means we are giving up on the possibility of growth," said Abe, whose decision came amid tension within his pro-business Liberal Democratic Party, including fears that the TPP could harm Japanese farmers.

The US, Marantis said, welcomed Japan's move. On Friday, his first day as US President Barack Obama's point man on trade, he said "important work remains to be done" to resolve issues over Japanese policies in the automotive and insurance sectors. The two countries have been in preliminary talks for a year, Marantis said.

US Representative Ed Royce, who is chairman of the House Foreign Affairs Committee and has voted in favor of most free-trade pacts during his time in Congress, supports the TPP but believes it won't be enough to restore US economic influence in the region.

"The center of economic activity within Asia has shifted gradually away from the US to China," the California Republican said in a Wednesday speech at the Heritage Foundation, a conservative think tank, in Washington. "Intraregional trade between China and Southeast Asia has grown tremendously. Trade between China and Australia has also grown. Even Japan is now more focused on the Chinese market than the American market. And while I fully support Japan's expressed interest to join the Trans-Pacific Partnership free-trade agreement, the TPP alone cannot reverse this trend."

Jon Tayor, a political-science professor at the University of St. Thomas in Houston, said that while the current trajectory of US-China relations is positive, given China's new leadership and Obama's nascent second term, the TPP can be seen as a symbol of lingering mistrust.

"Treating China like an opponent by not including it in the Trans-Pacific Partnership is counterproductive at best," Taylor said. "It would be much more productive to recognize and nurture the symbiotic relationship between the world's two largest economies."

Marantis said at Wednesday's briefing that Washington is focused on discussions with Beijing to address "competitive distortions" to trade that state-owned enterprises, or SOEs, can create. He said such concerns are also being addressed within the TPP framework and on a recently announced trans-Atlantic trade agreement between the US and the European Union.

"Just to ensure that when there is an SOE and there's a private-sector company, they're operating on a level playing field," Marantis said.

He said talks to form the Trans-Atlantic Trade and Investment Partnership had only begun, making comparisons with the TPP difficult, though both are aimed at increasing US exports and creating jobs.

"As in the TPP, we are going to be seeking with Europe to negotiate a comprehensive high-standard agreement, but Europe is a very different partner than some of our TPP partners. And we face different challenges with Europe than we may face in the TPP region," he said.

The Obama administration official, who succeeds Ron Kirk as trade representative, also pointed to negotiations with China on a bilateral investment treaty.

"It's very important. I think it will help to really put important obligations in place that will create stability in the investment climate and address, I think, very important market-access issues as well," Marantis said.