Economic development and a large population of Chinese speakers continue to attract immigrants from China to Flushing, in the New York City borough of Queens, to live, work and invest.

Anita Liu, who has worked as a real estate agent in and around the neighborhood for 12 years, said Flushing meets many newcomers' needs.

"Convenience is always what Chinese buyers ask for," she said. "Full-range living facilities in Flushing could provide them all they want."

The past two decades have brought increases and upgrades in the area's housing stock, shopping, dining, public transportation and schools, Liu and others said.

According to the US Census Bureau, the population of Queens has increased nearly 2 percent since 2010 and now stands at about 2.3 million. The fast pace is largely due to hot neighborhoods such as Flushing, which is home to baseball's New York Mets and tennis' US Open and was the site of two World's Fairs. 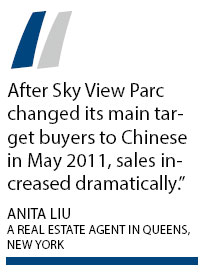 About 90 percent of the residents in Sky View Parc's twin 17-story towers are Chinese, the broker said, adding: "One of my clients bought three units in 2011."

Flushing has also found fans among those who live in China and want to invest in the United States.

"We found that they liked condo apartments, so everything was taken care of by the staff," Brothers said. The would-be clients also appreciated the area's shopping choices and the fact that Chinese is widely spoken locally.

Chinese are now the second-biggest group of foreign buyers of US residential real estate, surpassed only by Canadians, according to the National Association of Realtors. Chinese clients accounted for $7.4 billion in sales during the 12 months ended in March 2012, up 24 percent from the year-earlier period. In the US commercial-property sector, Chinese buyers spent $1.71 billion during the most recent period for which data are available.

According to Hurun Report, a Shanghai-based magazine known for its rankings of China's richest people, the Chinese mainland has almost 1 million millionaires, and nearly half say they want to invest in the US.

The wealth explosion in China has led many of its affluent citizens to diversify their assets with US real estate. Their reasons for buying vary. Some do so in anticipation of their children studying at US institutions, while others cite immigration or business purposes.

There are more than 30 banks represented in the neighborhood. JP Morgan Chase & Co has opened three branches, while Bank of China Ltd plans to relocate its branch from Manhattan's Chinatown this year.

Peter Du, president of the Flushing Chinese Business Association, said the neighborhood provides a good environment for new immigrants, including the prevalence of Mandarin.

"I believe Flushing has yet to reach its future potential," he said.