Chinese craving for organics is growing in California

One Chinese restaurant in Southern California is showing people that Chinese food isn't necessarily all about quick takeouts.

Appealing to health-conscious diners from both California and China, Farm Cuisine - owned by Jonathan Tam - in the San Gabriel Valley has recently been attracting a high number of tourists from the mainland who are increasingly wary of the foods they buy at home. Many say they want organic foods that have no traces of synthetic pesticides and chemical fertilizers.

Tam's pioneering restaurant is growing popular at a time when many in California, and across the United States, are being more conscious about where they buy produce and meats and where the restaurants they frequent are sourcing their ingredients. 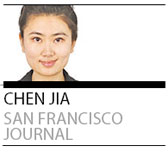 The organic farm movement arose in the 1930s in response to the industrialization of agriculture known as the Green Revolution, which involved developing technologies to create high-yield grains and evolving irrigation infrastructure but also the popularization of hybridized seeds, synthetic fertilizers and pesticides. Today in the United States, all organic food producers are required to obtain special certifications to sell their products in supermarkets.

But the need for organic food extends beyond California. In China, with the common occurrence of food safety scares, more and more Chinese people desire safer food. Consumers are willing to pay a premium for a sense of safety in their food, according to a report about upcoming food trends in China released last year by market research firms MEC China and CIC.

The report said more Chinese consumers are willing to pay higher prices to buy organic foods. It also said that "food safety" was a buzz phrase on Weibo, China's version of Twitter, in 2012 during the airing of a CCTV food documentary called A Bite of China.

Though authorities in China have vowed to crack down on companies that violate food-safety regulations, consumers are wary about the safety of their food. Consumers in China are buying organic food in mainland shops but also online and during overseas trips.

But some Chinese experts warn that organic food is not necessarily risk-free.

Other industry insiders argue that the low output per unit of organic food compared with conventional food is unlikely to be enough to feed the country.

In October, the American Academy of Pediatrics weighed in on organic foods, saying parents who want to reduce their child's pesticide exposure may seek out organic fruits and vegetables, thought that doesn't mean they're safer or more healthful than conventional equivalents, according to several scientific studies.

"There could be negative effects, especially in young children with growing brains" although rigorous scientific evidence is lacking, said Janet Silverstein, a co-author of the academy's report and a pediatric endocrinologist at the University of Florida in Gainesville.

"We just can't say for certain that organics is better without long-term controlled studies."