California wines pour on the marketing 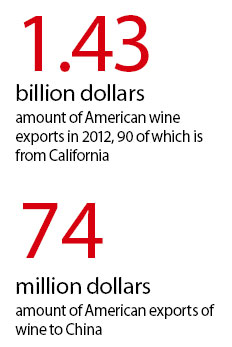 A brand-awareness campaign in China by California wine makers will meet the palates of local oenophiles next week when a bottle-bearing trade delegation from the state visits Beijing and other cities.

The Wine Institute, a San Francisco-based group that promotes California's wine industry, will host a "master class" to educate Chinese consumers about vintages produced in the state, part of an April 8-15 trade and investment trip led by Governor Jerry Brown.

US wine exports, 90 percent of which come from California, reached a record $1.43 billion in sales last year, a 2.6 percent increase from 2011. It was the third straight year of increases, according to the Wine Institute. On the Chinese mainland, 2012 sales of American wine totaled $74 million, up 18 percent from the previous year.

California, with over 3,600 wineries and 4,600 wine-grape growers, shipped 18 million liters of its many varieties to China last year. The state's wine shipments to the Chinese mainland have been on a decade-long upswing, starting from a modest $3.4 million in sales in 2002, Gallagher said.

A number of red and white wines from California are popular in China, including Zinfandel, the state's signature varietal.

"The quality, diversity and value of California wines are our strength in the fast-growing and increasingly important China market," Gallagher said.

To promote the industry and its output, the Wine Institute is in the final leg of a three-year brand-awareness and advertising campaign in China. The effort involves frequent trips by representatives of California wineries along with wine tastings.

The reputation-building drive by California officials and wine makers faces some hurdles. There is a perception among Chinese consumers that wines from the state are often overpriced and of low quality.

The Wall Street Journal recently quoted a San Francisco-based vintner as saying that he has heard such complaints while attending wine events in China. He told the newspaper that this is due to vendors flooding the Chinese market with cheaply made wine and selling it at inflated prices.

The Wine Institute's Gallagher defended the value of California wines sold in China.

"California wines offer great value at all price points, despite the tariffs and taxes that are levied on imported wines in China," she said. "In our experience, the California wines that are available in the China market are very high-quality and reasonably priced as compared with our competition."

The value proposition for wine in China has to factor in the young, fast-growing character of the market, said David Duckhorn, president of Via Pacifica Selections, a wine distributor based in Napa, a center of California wine production. Wine-drinking is relatively new in China, and middle-class consumers are still working out their tastes and preferences.

"Historically, there was not enough information about wine in the market and consumers were paying prices that were unreasonable for the wine quality. This was true for wines from all regions, not just California," Duckhorn said, adding that he saw as many examples of overpriced French wine as overpriced California wine.

Now, with Chinese consumers sharing opinions on social media, he said, there's greater sophistication in the market and an understanding of how imported wines are priced, such as the impact of shipping costs and import tariffs. Many wine drinkers in China have developed a personal price range for their purchases, the wine company executive said.

"In general, I have not seen 'poor-quality' wine prevalent in the market - overpriced, yes, but not necessarily poor quality. The value just wasn't in line with the quality at all price points, but it is getting there quickly," Duckhorn said.

He founded Via Pacifica in 1998 to import and distribute wines in the US market. After some exploratory sales to China two years earlier, the company in 2008 opened an office in Shanghai, focusing on importation and distribution of California wines for the burgeoning Chinese middle class. It now has an office and warehouse in four Chinese cities and employs 18 people.

Currently, Duckhorn's company sells about 75 individual wine products - 80 percent reds, 20 percent whites - from 10 producers. "Our sales have increased steadily since 2006 and exceeded 25 percent growth from 2011 to 2012," he said.

On Monday, China Foods Ltd, part of State-owned food conglomerate Cofco, said it will spend about $20 million to buy two or three wineries in Australia and the US in hope of increasing its wine sales and beating back competition from imports. Managing Director Luan Xiuju also said the company is in talks with two leading international wine dealers to become their exclusive brand representative and distributor in China.

Although consumers in China are more accustomed to beer and traditional baijiu, "they are open and earnest in their desire to learn and try our wines", Duckhorn said.

The biggest challenge, however, is educating potential wine aficionados so that they make informed buying decisions, he said.

"We work very hard to make consumers feel OK in making their buying choice - for any occasion. If a consumer wants a bottle to share with friends at home, it is different than buying a wine to give as a gift for your boss.

"We want consumers to have the confidence that what they are buying and drinking is right for the situation. The worst thing we can do as an industry is to 'elevate' wine into a special-occasion drink. Wine is meant for everyday consumption as part of a healthy lifestyle."

Yuan Yuan, marketing director at Shanghai Hitrust Imported Food Trade Market Co, a wine importer, said one of the most popular California wines in China is Carlo Rossi, made by Ernest & Julio Gallo Winery. She attributes this to the marketing strategies of Gallo's Chinese partner, Nanpu Food Co.

"In addition to Carlo Rossi, Napa also has some reputation in China," Yuan said, referring to the famous wine-growing valley in Northern California.

Still, she said, many Chinese haven't caught on the idea of the US as a major wine-producing nation.

In late March at the Chengdu Food and Drinks Fair, a major annual showcase in southern China for wine and spirits, there were more people packed into the room where French wines were presented than in the one for American wines, Yuan said.

"Although nowadays the quality of French wines varies widely, our distributors still tend to choose them to promote because it's relatively easy," she said.

But Yuan considers wine from the United States to have many favorable qualities, such as the absence of an aftertaste found in some French wines.

"Wine-drinking should be fun, easy and relaxing," she said.