Pools of oil, overdosing on MSG and the mysterious General Tso, whose deep-fried chicken is the bane of Weight Watchers clients, sully the image of American Chinese food. New York's Rickshaw Dumpling Bar is seeking to revolutionize one of the oldest mainstays of Chinese food: the dumpling.

"I think there's a way to do (American Chinese food) well and do it healthy," said Rickshaw co-founder Kenny Lao. "Asian food has an emphasis on freshness and vegetables and it clearly comes out as a winner health-wise across different types of ethnic food."

With traditional Chinese recipes as its base, Rickshaw's menu fuses local and organic ingredients with innovative flavors, such as chicken and Thai basil or mashed edamame with lemon in a whole wheat wrapper, to transcend the classic pork, which is nevertheless on the menu.

Why is Rickshaw pushing a dumpling revolution?

"On a personal side, dumplings were one of my favorite meals growing up because of the social aspect of it," said Lao, whose mother is from Hunan, China, and birth father is Thai. "I was an only child, so dumpling nights were a night where another Chinese family would come over and we'd all wrap dumplings and it was just really fun."

On the business end, Lao said he did his own market research by cold-calling Chinese restaurants throughout the US, both high and low end, and asking for the top three items customers ordered.

"Every single time dumplings was in the top three," Lao said. "I thought, 'This is a great thing to be able to focus on,' and in New York City you can have a restaurant that focuses on one thing and does it really, really well." 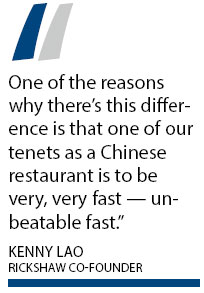 "At the time we chose [this partner in Iowa], they were a cooperative, one of the few cooperative farms in America where there were just local farmers trying to keep it small and we really liked that aspect," Lao said.

Because the cooperative was already shipping enough volume to the East Coast, Lao said Rickshaw's carbon footprint was negligible.

"For a lot of businesses, [going green] brings in the question of cost," Lao said. "But you realize you really have to do it in general just for your own company's footprint on Earth."

As for customers, many rate the dumplings' taste high as well as their cost, which Lao acknowledges as being among the most expensive in the city.

In comparison with Manhattan Chinatown restaurants, where an order of five pork dumplings typically costs $1, not to mention an order of 50 for $8, Rickshaw charges $3.75 for three dumplings, $6.50 for six and $7.50 for six that are two different types.

Lao said he is aware of complaints about prices and said the business tries to remain transparent. On the different charge for six dumplings of two varieties versus six of one kind, Lao provides some reasons.

"One of the reasons why there's this difference is that one of our tenets as a Chinese restaurant is to be very, very fast - unbeatable fast," Lao said, noting that the business sometimes has more than 200 customers in an hour.

"The way we have the kitchen set up, when everyone starts to put in smaller orders, it does slow things down a little."

Each dumpling has its own sauce, so the extra cost covers that and the extra paper product used, he said.

"It really comes down to one of our big tenets: 'It's what's inside that counts,'" Lao said. "A lot of people try to nail us for [the price], but I really believe that there are people who appreciate the value of great ingredients, and also the convenience."

Rickshaw opened its first shop in Manhattan's trendy Chelsea/Flatiron neighborhood in 2005. The business started a food truck service in 2008 and then in 2011 opened two more stores based on which areas proved most popular with their food trucks - one by Grand Central Station and another in Times Square.

"We're looking for someone who understands the value of our brand and really recognizes that we're a brand leader here in New York City, as well as nationally as an Asian fast casual restaurant," Lao said. "We go through a lot of homework to figure out not only what is nutritionally good for you and natural, but also what's really tasty and accessible."