As China's environmental woes increasingly seep into citizens' daily lives, a new collective consciousness is taking form and people are looking for change.

"In the past two years alone, there's been a lot of public outcry on the high pollution levels in cities all across China," said Merisha Enoe, senior research analyst with the China Greentech Initiative.

Following the "airpocalypse" that enshrouded vast pockets of the nation in a toxic cloud this past January and February, Enoe said people took to Weibo - China's Twitter equivalent - demanding the government take action.

"In 2008, there were no greentech projects," said Elle Carberry, co-founder and managing director of the China Greentech Initiative. "Now, there is potential for projects, and it has to do with the greater public awareness and greater government policies to enable that."

Last week, Carberry and Enoe flew to New York from Beijing to present their findings in the China Greentech Report 2013: China at a Crossroads at the China Institute. Carberry will also present the report with a panel of environmental experts in Chicago on July 10.

"[In this year's report], our key finding is the top-down mandates and policies of the [Chinese] government is not enough," Carberry said in her presentation. "The government has outgrown the ability to mandate its economy and now it has to let the market get up and take over."

The six-year-old Beijing-based China Greentech Initiative is not an NGO, but a private business of 27 employees who are collaborating with about 1,000 experts and 100 organizations, businesses and government groups to take on China's environmental issues and seize on commercial opportunities to improve citizens' quality of living.

The group conducts about 15 collaborative meetings annually to take on specific sectors one at a time, such as industrial wastewater treatment, sulfur oxides and nitrogen oxides, green building materials, renewable energies, or urban transportation.

"We work together with companies to integrate solutions and now we're working on divvying up the projects for actual deployment," Carberry said. "We want to find where exactly are the best cities in the country that are serious about growing their city economically, but on a cleaner, greener footprint." 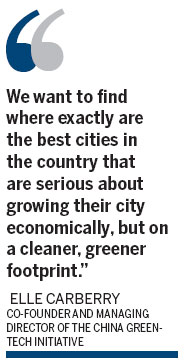 In 2009, the group published a greentech market map in its first report to define all the more environmentally sound commercial opportunities in China. In 2011, a top Chinese government official told Carberry the map's definitions of greentech sectors became the definitions for the Chinese government's seven strategic emerging industries.

"Who would have known that in some small way we can influence the government," Carberry said. "It confirms that these commercial opportunities are absolutely strategic to the nation's growth."

The 2013 report examines China's pollution challenges and the progress made in achieving greentech targets in the government's 12th Five-Year Plan (2011-15), and also suggests a new approach for sustainable development.

The 145-page report highlights the importance of focusing on achieving outcomes with a greater positive environmental impact as opposed to concentrating on hitting quantitative targets.

Carberry said China, where she has lived since 2002, is at a crossroads now with new leadership, and which path the country will take has yet to be determined.

"There are a lot of places that call themselves a 'low-carbon eco-city,' but it's open now as to who is really going to step forward and be progressive about [greentech]," Carberry said. "GDP was the only number measured for the last 30 years, but now [Chinese mayors] have KPIs - key performance indicators - to show their environmental growth."

Carberry said work is underway this year to identify 250 of China's best greentech projects, which would then be integrated into cities depending on their needs, whether it be on developing cleaner industries, designing greener buildings or working on better transportation systems.

"We're going to find out these things about the cities through a more granular focus about what projects they're doing, and those will be the indicators as to which cities are serious about [greentech]," Carberry said. "We're on a mission to find out which of these mayors want to be the green environmental czar."