Geely again looking at US market 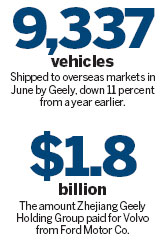 A plan by Chinese automaker Geely Automotive Holdings Co to start exporting cars co-developed with Sweden's Volvo Car Corp to the United States in two years was greeted with mixed reviews by US auto-industry analysts.

"I'm not convinced that US consumers are ready for a Geely-badged car in the US, even if it's on a Volvo platform," said David Sedgwick, an analyst and the former Automotive News editor. "It could blur Volvo's brand image in the US, and that would be bad news for the Swedes."

Geely CEO Gui Shengyue told Bloomberg News last week that the automaker, whose parent company bought Volvo in 2010, plans to start exporting cars that it develops with the Swedish company to the US in 2015. Geely, which made an unsuccessful bid to crack the US market several years ago, is betting that Volvo's reputation for safety and reliability can help it win buyers in developed nations at a time of slowing sales in China.

"Our acquisition of Volvo enhanced our image and overseas consumers are seeing us as an international company," Gui told Bloomberg. "Our deliveries in the US and Europe will be banking on those jointly developed models."

Gui told reporters at a Hong Kong briefing that research and development on the proposed Geely-Volvo car is under way. "I believe we can see the new product in the year after next," the executive said. Details about the vehicle were not disclosed. A US spokesman for Volvo couldn't be reached for comment.

Geely's possible exporting of cars to the US comes as its effort to ship its cars around the world is sputtering. Geely sent 9,337 vehicles to overseas markets in June, down 11 percent from a year earlier. A Geely spokesman attributed the drop to protests in Brazil, a stronger yuan and a weaker-than-expected recovery in emerging economies.

Zhejiang Geely Holding Group, which acquired Volvo from Ford Motor Co for $1.8 billion in the biggest overseas purchase by a Chinese automaker, reached a memorandum of understanding with Volvo last year to "leverage its full access" to technology to develop vehicles. In February, Volvo said it would establish a joint research and development center in Sweden with its Chinese parent.

Just getting a car to the US market would be a huge accomplishment for Geely. The only Chinese-made vehicles now exported to the US are small trucks and off-road vans such as the Wuling Minimax, according to the American Association of Motor Vehicle Administrators. Although Honda Motor Co's Chinese-made Fit hatchback is exported to Canada, it is not scheduled to hit US showrooms until summer 2014. The US version will be the first Fit manufactured in North America.

In the past several years, Geely, Brilliance Auto, BYD Co and other Chinese automakers have announced plans to export Chinese-built passenger cars to the US, but none have come to fruition, according to a recent report by the Congressional Research Service.

Tim Dunne, director of global automotive operations at JD Power and Associates, said Volvo's design and engineering experience and expertise reduce the obstacles for Geely, this time around.

"Certainly, Volvo has advanced knowledge of vehicle building, and the expertise to help Geely build higher-quality vehicles that not only meet strict US safety, fuel economy and emissions regulations, but also appeal to US consumers," Dunne said.

"The fact that Volvo already has long-established relationships with some of the best component suppliers in the world, the best tool makers, has exposure to leading manufacturing practices, and is familiar with issues like industry pricing structures, and parts scheduling and shipping operations, is already a big advantage."

If some of Volvo's "knowledge and experience" can be transferred to Geely, "there is tremendous potential savings in terms of time and capital investment", Dunne said.

Overall exports in China dropped by one fifth in June, following a 16 percent drop in May, the first year-over-year drop in five years, analysts said, citing the same reasons for the decline of Geely's exports.

In a statement, Geely said it expects the operating environment to "remain challenging" for the rest of the year. "Competitive pressure on domestic brands in the China market should increase considerably in the coming years as most major international brands are strengthening their presence," the company said.

Experts: Fed's taper is a key issue for G20