US may be losing in globalization

While the term "globalization" oftentimes is linked to the United States, which has been traditionally seen a leader in this economic trend since before World War II, the lead actor is unexpectedly falling behind some emerging economies including China and India, a recent study of globalization trends finds.

The study released by London-based UHY, a network of independent audit, accounting, tax and consulting firms, used analysis from its advisory professionals in 27 countries with ratings in their economies on factors including taxation and trade policy.

The findings suggest that the US at No 25 (with Italy) is falling behind Europe and emerging economics such as India (No 8) and China (No 17) in the race to capitalize on globalization and could potentially miss out on future economic growth as a result. Germany - with a score of 6.4 out of 10 - topped the list, while Japan ranked last.

Richard David, CEO of UHY's affiliate in the US, noted that the US' poor ranking in the survey indicates that "while it is cushioned by the sheer size of its own domestic economy, it could achieve more by doing more to encourage and support American companies in exporting and expanding overseas".

"One key factor hampering the US from fully harnessing globalization is that it levies the highest tax charge on repatriated profits of all countries, potentially acting as a significant barrier to domestic companies looking to expand overseas," said David.

Jon Taylor, a political science professor at the University of St Thomas in Houston, said American policymakers should be "very concerned" with the results of the world's No 1 economy.

"This suggests that the US economy is more aligned to domestic activity than either China or Europe,"noted Taylor.

Taylor said the study also undercuts the Obama Administration and their economic initiatives.

"Because it would appear that they are doing more harm than good to US globally-oriented business activity," he said. "That is the recipe for inefficiency, crony capitalism, weak performance, diminished return on investment, restrictive and/or punitive tariffs, and even trade wars."

David said the survey also raised the issue that the US should look at how it should improve relationships with emerging economies in Africa and Southern and South East Asia as they become bigger consumers and larger importers with growth in their income rather than just focus on its traditional cooperative trading partners such as Canada, Mexico, Japan and the EU. 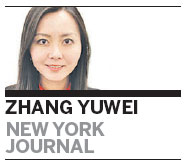 The study showed that China was the best performing of the world's top three economies with a score of 4.6, and India was the best-performing BRICS - Brazil, Russia, India, China, South Africa - country with a score of 5.1, with help from its low labor costs with an average monthly salary less than half as high as China's.

"Countries like China and other BRICS have experienced only modest declines in economic growth since 2007 and 2009," said Taylor, an avid China watcher.

"As China and the BRICS continue to advance economically and output growth recovers, globalization should likely progress," said Taylor, adding that the Shanghai Pilot Free Trade Zone is one example of this, which shows China's efforts to harness globalization by boosting its process of opening-up through further economic reform.

While China did far better overall than the US, both of the world's two largest economies' scores were brought down by the high taxes their governments impose on corporate "repatriating" overseas profits, according to the study. UHY explained that these taxes reduce the incentive for businesses to set up overseas subsidiaries, particularly for small- and medium-sized enterprises for whom the costs of setting up international operations would be proportionately more expensive.

Less than half of the 27 countries in the study imposed no tax on repatriated dividends.

"American firms are often household names around the world but actually our taxation system is very poorly geared towards encouraging US companies from growing overseas, with the highest tax rate on repatriated profits of any country in the study," David noted.

"There's no real positive correlation between the number of double tax treaties and overall level of foreign direct investment in a particular country," Zhang noted.

"Moreover, double tax treaty tends to have the practical effect of shifting substantial amounts of tax revenues away from the developing countries," he added.

Senior US diplomats off to 'quench fire'

Xi writes to Chinese in German

Will China dominate the world?