China is the world's largest producer of cotton, and half the country's output comes from Xinjiang. But the landscape is gradually changing, as Li Xiaokun finds out in Urumqi.

The sun is sweltering and rows of cotton pickers are bent over in the fields, carefully plucking cotton from the prickly bolls. Among them is Wang Aihong, who, for more than a month, has spent 13 hours a day picking cotton. It is early autumn in Northwest China's Xinjiang Uygur autonomous region. There is a bumper harvest this year for cotton farmers, which means a lot of backbreaking work for cotton pickers like Wang. But the 40-year-old, who has traveled more than 3,000 kilometers from Liangshan county in eastern Shandong province, is happy. "This is good money for me, as much as I can make," Wang says.

Cotton pickers like her in the outskirts of Xinjiang's Hutubi county, not far from the regional capital Urumqi, can get 1.8 yuan for every kilogram of cotton they pick.

Wang, who also worked here last year, has returned accompanied by more than 20 fellow villagers this time. They will each pick more than 100 kg a day in the 133-hectare cotton field.

That is a lot of money for Wang's family, whose annual income from fieldwork and odd jobs come up to less than 10,000 yuan.

Wang is among more than 1 million workers who have been heading to Xinjiang every year for the past decade to pick cotton. Xinjiang is expected to yield about 3.2 million tons of cotton this year, accounting for half of the national output, figures from the regional authorities show. 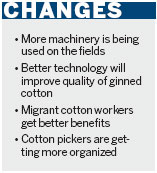 But the situation is unlikely to continue for long. In fact, many say the sector has reached a turning point.

"The first time I heard of the throngs of cotton pickers coming to Xinjiang from the inland provinces was in 2000. We were talking about 1.5 to 2 million cotton pickers then, but this year I heard there has been a sharp drop in the number of pickers because cotton-picking machines have become more popular," says Hu Zhaoguang, 58, owner of the field where Wang works.

The Xinjiang Production and Construction Corps, also known as Bingtuan, a unique economic and semi-military governmental organization, estimated that the region needs a total of 700,000 cotton pickers this year.

Hu says he, too, favors using machines to pick cotton because it is cheaper. He hired the workers this year for the harvest because Hutubi county has yet to regulate the use of machine-picked cotton. In Xinjiang, authorities buy most of the cotton stocks at prices that help protect the interests of growers.

But nearby, Regiment 143 of Agriculture Division 8 under the XPCC plans to have 98 percent of its 6,666 hectares of cotton fields harvested by machines this year.

Human rights 'tool' for US