China will boost the development of its tourism industry by further opening the market to private and foreign capital, according to a statement issued after an executive meeting of the State Council on Wednesday.

The government will give support to the upgrading of the tourism industry in terms of investment and financing, land use and publicity, the statement said.

The meeting, which was presided over by Premier Li Keqiang, emphasized the leading role of tourism in the modern service industry. It is expected to accelerate the development of local economies, promote employment and protect the environment.

Wang Yanyong, director of the Tourism Development and Planning Research Center of Beijing Jiaotong University, said the measures will stimulate the development of tourism, especially in remote areas.

"This will significantly encourage tourism development in the central and western regions where we have great scenery but no mature tourism industry and convenient transportation," added Wang. "Relying on government investment will take a much longer time." 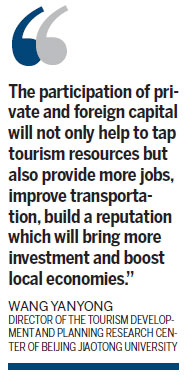 "The participation of private and foreign capital will not only help to tap tourism resources but also provide more jobs, improve transportation, build a reputation which will bring more investment and boost local economies."

In the first quarter of 2014, income in the tourism industry surpassed 960 billion yuan ($153 billion), an increase of 15.2 percent, according to the China Tourism Academy. Outbound travel enjoyed 17 percent growth over the same period.

"After 30 years of reform and opening-up, China has become a giant of tourism and still has a large potential for further development," said Dou Qun, a tourism industry professor at Beijing Union University. "However, we have noticed that we have more visitors headed overseas than visitors coming to China. The deficit of the tourism service trade was more than $50 billion last year."

"China needs to build its own tourism brand like 'Disneyland' to attract more visitors."

Zhang Guangrui, honorary director of the tourism research center with the Chinese Academy of Social Sciences, emphasized that the development of tourism must go along with the protection of the environment.

"Only if we combine the development and protection of natural resources and cultural heritage together, can we find a sustainable path of tourism development in China," Zhang said.