The year 2015 will witness more cooperation and interaction between China and the US, a senior US government official said on Wednesday in Washington.

"In 2015, we approach a very rich agenda in the diplomatic arena, in the trade and investment arena, and the development and cooperative arena, with a lot of momentum," said Daniel Russel,assistant secretary of state for East Asian and Pacific Affairs, speaking on US Policy Priorities for the East Asian and Pacific Region.

Deputy Secretary Antony Blinken will travel to East Asia next week, his first trip overseas in the position, the US State Department announced earlier Wednesday.

The former deputy national security adviser to President Obama will meet with a wide range of government officials and non-governmental experts to advance relationships between them, according to the State Department press release. Visits to China, South Korea and Japan are on his list.

"This is an extremely important visit," Russel said at the Washington Foreign Press Center briefing. "I can personally attest to the depth of Antony Blinken's knowledge, experience and interest in the region and its issues."

Russel said he will also be in Beijing when Deputy Secretary Blinken visits on Feb 10-12 and will hold talks on East Asia. 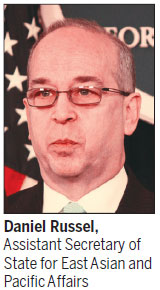 The promising China-US relations of 2015 can be attributed to President Obama's trip and meeting with Chinese President Xi Jinping last year in Beijing, Daniel said.

"I want to make sure that we continue to maintain a constructive relationship," he said.

Mainly two outcomes were highlighted by Russel, a former special assistant to the president and senior director for Asian affairs at the National Security Council.

One is the ability to cooperate on issues of shared interest, and another is to "address directly the important differences and disagreements in a way that doesn't undermine the cooperation".

Some previous proposals of cooperation have been implemented, said Lawrence Lau, former vice-chancellor of the Chinese University of Hong Kong.

He said China-US economic cooperation can be win-win and only win-win cooperation can be durable and sustainable. "It is not pre-destined whether China and the US will become 'friends' or 'foes', but such expectations can be self-fulfilling," he said.

"It is heartening to see some of the proposals that affect not just the two countries, but the whole world, for example, those that relate to climate change and to international trade, have been adopted," said the Hong Kong economist. "That is why we advocate a new kind of major power relations in our study."

"The quality and extent of our coordination and our dialogue has direct benefits for both countries, for the region, and for the world," Daniel said.

At various levels of collaboration with China, Daniel said the US wants to be "ambitious" in both planning for the strategic and economic dialogue as well as "redoubling efforts in negotiating bilateral investment and trade" to "set the stage for significant milestones" for the economic and trade relationship.

The US-China Strategic and Economic Dialogue, established in 2009, takes place annually at alternating capitals between the two countries. The latest round of meetings was held in July in Beijing.

Mutual trade has mounted to about $540 billion in the first 11 months of 2014 - 5 percent higher than the same period the previous year, according to the US Census Bureau.

"We see 2015 as an important year for making headway in both areas of cooperation and concern to narrow disputes," Daniel said.