As a follow-up to the first China-themed float appearing in Macy's Thanksgiving Day Parade, Beijing tourism gets a second push in New York City via a promotion campaign that aired on WABC-TV in the tri-state area over the weekend.

The first 30-minute episode of a series focusing on the country's capital aired on WABC, Channel 7, in New York, New Jersey and Connecticut on Dec 20 at 7:30 pm, introducing the city to viewers of the most-watched channel in New York.

"From the feedback we got on the Beijing-themed float, we feel that it was a great success and we wanted people to learn more about current Beijing," Li Li, executive vice-president of the Sino-American Friendship Association (SAFA), told China Daily prior to the program's broadcast.

"We want to show off the beautiful aspects of Beijing's landscape, especially spots like the Temple of Heaven, which we had featured on the float. Not a lot of people know about that temple, and now people will know that it's in Beijing, China. It motivates people to go check it out for sightseeing and to learn more about culture in China," she said.

The Beijing Municipal Commission of Tourism Development - the city's official tourism bureau - produced the series and worked with New York-based SAFA to promote the city.

SAFA is a non-profit, non-partisan organization that promotes US-China cross-cultural exchange. Commercials shown during each episode also focused on the city, and were paid for by the tourism commission.

The first episode of Visit Beijing was a general introduction of Beijing - entitled Beijing: A Modern City With An Imperial Past - and subsequent episodes of the series will be aired throughout 2015, according to Li. The second episode on Beijing's imperial history will be aired the weekend of Lunar New Year, which falls on the second-to-last weekend in February.

"This is a perfect time to air the program because it's the holiday season. This is a continual introduction of Beijing after the Thanksgiving float, because people get together during the holidays and this will be something they can discuss with their families," Li said.

Airing a program on Beijing on a major network is a "big deal," she added, because of the opportunities for the tourism bureau to target a general audience, not just those within the travel industry.

The program aired on Saturday evening and then was streamed online. As the most watched channel in the city, WABC-TV averaged 296,000 viewers per quarter hour in 2013, according to the channel. Its website - 7online.com - recorded 10 million page views per month.

If Visit Beijing does well in the tri-state area, there is interest in taking the program nationally, Li said. The New York area was chosen as a launching point because it has the most visitors traveling to China annually, Li said.

In 2013, 2.1 million Americans visited China, according to China's National Tourism Administration, and recent news of US-China's agreements to increase the validity of visas from one year to 10 years should be a boon to travel for both countries.

Li Jinzao, president of the National Tourism Administration, recently met with his US counterparts in Chicago during the China-US Tourism Cooperation Forum, to discuss ways in which the tourism sectors in both countries can accommodate more tourists in the upcoming years, according to China Tourism News. 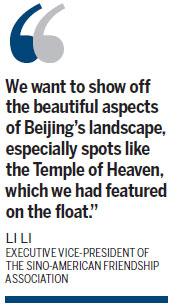