"It's extremely important to carry on financial sector reforms, social security reforms [and] reforms of monetary policy that will ensure that the set of tools that the authorities have is fully modernized and appropriate to ensure stable and solid growth in China in the future," said Gian Maria Milesi-Ferretti, assistant director of research at the IMF, during a press briefing about the World Economic Outlook (WEO) in Washington.

The WEO, released on Tuesday, forecasts economic growth in China of 6.8 percent this year, and 6.3 percent in 2016, maintaining the same forecast from January.

The Asia and Pacific region is projected to be moderating, but still will "continue outperforming the rest of the world over the medium term", the report said.

It also kept global growth predictions in line with forecasts in the January 2015 WEO, which is 3.5 percent in 2015. The global growth is "moderate and uneven", according to Olivier Blanchard, chief economist, economic counselor and director of research at IMF.

Blanchard said there are four forces shaping the world economy over the medium term: legacies of the financial and the eurozone crises, a decrease in potential output growth, a decline in the price of oil, and foreign-exchange rate movements. 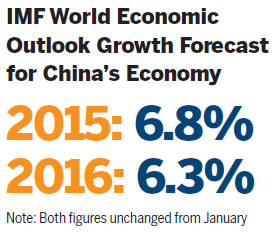 In emerging markets, including China, the decline in potential growth is even more visible. Although capital growth and investment will recover, weak productivity growth will remain, Blanchard said.

"For China, the main risk is failure to implement the reform agenda to address financial risks, rebalance the economy and tap new sources of growth," the Washington-based institution stated in the WEO.

It said that structural reforms are essential to recover productivity gains in China and in the Asia-Pacific region. China should deepen the financial and State-owned enterprises (SOEs) reforms to improve resource-allocation efficiency, as well as reform the pension system, to ensure a more sustainable growth path in the long term.

The report said that while the Chinese economy is shifting into a more sustainable pattern, China would face a further slowdown because of its efforts to reset from investment-led to consumption-led economic growth.

The World Bank also released a report on the East Asian Pacific economy. It echoed the view that implementation of reforms might result in short-term declines.

"This is going to have some short-run negative effect on the level of growth but positive medium-run effects because you have slower growth of credit, slower buildup in imbalances, and ultimately you are heading toward a place where you have a more balanced structure of the macroeconomy," Milesi-Ferretti said.

Liu Xiaoxian in Washington contributed to this story.