Henry Paulson said that the US should join the China-led Asian Infrastructure Investment Bank (AIIB), and that he looks at the actions of the current administration with regret on the matter.

"We should" join the bank, said Paulson, former US Treasury secretary. "It would be very difficult to have the US Congress vote for anything that's pro-China. It's a fact. I don't think if the administration wanted to join the AIIB that they could have [because of Congress]. But I do think that they sure could have said, 'We want to be an observer, we want to work with you.'

"There were two mistakes made: not joining, and if we pick a fight, we want to make sure it's one that we're going to win, not one we're destined to lose," he said.

Paulson, who was Treasury secretary under George W. Bush from 2006 to 2009 and former chairman of Goldman Sachs, said that the current structures of other multilateral banks - such as the World Bank and the Export-Import Bank of the United States - don't necessarily lead to "better decisions when it comes to building the infrastructure we need to build", something that the AIIB can help with.

"As a former Treasury secretary who is very loyal to my government and is very complimentary of a number of things this administration has done - like the climate-change agreement, and there's been a fair number of things that have come out of the S&ED (Strategic and Economic Dialogue), and out of US-China relations - I look at this with regret," he said. Paulson made the remarks Monday at the Asia Society as he discussed his new book Dealing with China: An Insider Unmasks the New Economic Superpower. 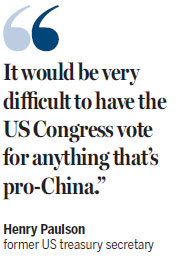 The AIIB was proposed by China to finance infrastructure projects in Asia, and is regarded as a rival to other multilateral development banks like the Asian Development Bank, the IMF and the World Bank.

Most Asian countries have joined the bank, as have European powers like Britain, France and Germany. Austria announced its plans to join the bank on March 24, the latest European country to do so.

"I think we've got to expect that Xi Jinping is not waiting around for us to declare him a great power," Paulson said. "He says, 'I am a great power,' and he's going to do the things that every other great power has done, including the United States, to make his mark."

Paulson writes in the book that the two biggest powers in the world need to act in complementary ways, and that the nations' challenges will be hard to solve if they work at "cross-purposes". If the US attempts to weaken and exclude China, it will run the risk of creating China watchers' worst-case scenarios into a "self-fulfilling reality", he wrote.

On the 2016 federal elections, Paulson joked that he prefers candidates "say as little as possible" on China during campaign season because no candidate is going to say anything that China will want to hear.

"And what history has seen, every candidate has said things that were unattractive, and then what happens is once they become president, we recognize that they need to deal with China if they want to get important things done," he said. "So as I said, I'd like to have as little said as possible during the campaign."