Solving a riddle with a harp and the magic of words 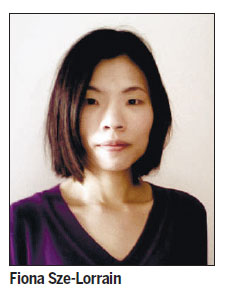 As the daughter of diasporic Chinese parents in Singapore, Fiona Sze-Lorrain spoke both Chinese and English at home. From a young age, her Chinese heritage signaled discipline and tradition. In accordance with her parents' wishes, she studied the guzheng, a classical Chinese instrument, and at age 9 made her performance debut at Singapore's Victoria Concert Hall. Later, she went on to perform at Carnegie Hall and Lincoln Center for audiences that included Bill Clinton and Princess Diana. But at the time, she was simply following the rules.

At school, her composition assignments were in Chinese, and while she very early on demonstrated a knack for the written word, she didn't fully appreciate the freedom writing could allow until she began to write in English as a young adult.

For Sze-Lorrain, who recently released a book of poetry called My Funeral Gondola, creative inspiration only came with distance.

"When I was a kid, anything that had to do with Chinese culture - the guzheng, my schooling - had to be done exactly right," she told China Daily. "Later, when I began writing in English, I found myself exploring Asian themes, but from a distance that felt incredibly freeing."

As a student at Columbia University, she dabbled in theater, writing and East Asian studies, and came to realize that there was more to be understood in the space between words and cultures, she said. Studying her own heritage from an intellectual perspective allowed for an ambivalence she had never indulged, and poetry provided an outlet for evolving views.

"The guzheng is a tradition, and you are always the carrier; you cannot disobey the instrument," she said. "In theater, I realized that another form of communication was through the physical body. And in poetry, I saw that I could approach the language on my own terms, with my own imagination as a tool."

When she struggled with writing, she found solace in source material and the writing of other poets; from there, she discovered the pleasure of translating Chinese works. She has since translated books by the poets Yu Xiang, Bai Hua and Yi Liu, among others.

Translation has also provided room for creative expression, and Sze-Lorrain does not undertake a translation project unless there's the possibility for exploration, she said. Although it's almost impossible to fully translate a poem with cadence and meaning intact, she finds the challenge exciting.

"Silence is the common language, even when the words are not the same," she said. "If you commit to that path, your whole perspective of language and life is different. It's no longer a linguistic puzzle; it's something spiritual. You begin with an act of failure, in humbling yourself to the fact that you will never fully be able to translate the words - but as you travel backwards from that realization, images unravel themselves faster than you can chase them. I find it to be a more poetic way of approaching poetry, translation and the cultural differences we all encounter."

Her Chinese heritage is evident throughout her work. In one poem, she writes: "Wandering in cloisters that breathe with trap/ doors, I am moving in a subjective time. Tea egg vendors fan their/ stoves, they count their coins in long gowns of smoke."

Frank Stewart, editor-in-chief of MANOA: A Pacific Journal of International Writing and a professor at the University of Hawaii, believes that Sze-Lorrain's grasp of languages is essential to her work as a poet.

"The mixture of language backgrounds in her work is haunting and melodic, and is part of something new that's going on in poetry," he told China Daily. "She exhibits a restraint in her language and a respectfulness of Chinese literature and history, and great poetic intelligence. Also in that mix is her music training, which you see in her precise striking of notes, and in the deliberate choice of her words."

Sze-Lorrain still performs as a guzheng soloist, exploring both classical and contemporary music. Her inspirations include cultural experience and what she calls "an inner listening".

She describes playing a traditional Zhejiang composition on the "zheng", punctuated with Bach's counterpoint. The instrument has always been a window into her heritage, a means to "solve a riddle with a harp", to quote a Bible verse. Her understanding of Chinese culture is linked to the history of the instrument itself, she said.

While she has visited China frequently, her experience of the culture is rooted in her understanding of its music and its literature. But that distance is what defines her, she said.

"I am surrounded by different cultural forces, and I occasionally experience a conflicted state," she said. "It's always tempting to push away that Asian heritage, and say that it's just your parents and not you. But I've realized that I write about Chinese traditions and people because I think I have to get over it in writing. Otherwise I wouldn't feel honest as a writer."

Sze-Lorrain is currently working on a book of short stories, and music featuring French music on the guzheng, she said. She lives in Paris, and when she feels the weight of her busy life, she sets aside time for Chinese calligraphy to moderate her breathing.