Left-behind, but not forgotten

There are an estimated 61 million children in China living without one or both of their parents. A book of letters, diary entries and pictures by these young people has proved a sensation, and revealed the rich inner-lives of some of the country's most vulnerable people. Sun Yuanqing reports from Anlong, Guizhou province.

Yang Zhengxing is 13. Like many of his peers in the mountainous county of Wanfenghu in Guizhou province in Southwest China, he looks much younger than his age because of malnutrition. His mother left the family when he was 4, and his father works as a construction worker in Zhejiang province, some 25 hours' train ride from home, and returns only once a year. Yang lives with a younger brother and his grandparents who are both in their 70s. Despite his small frame, Yang is considered a major labor source in the family. He toils in the corn field with his grandfather and takes care of his brother. Whatever happens in his life, he records it in his diary.

"It's like having someone to talk to," he says. "Putting it on paper makes me feel better than burying everything in my heart."

As of May, there are 61 million "left-behind children" in China, as estimated by the All China Women's Federation. That means one out of every five children is living without one or both parents, who have left to become migrant workers in urban areas far from home to earn a living.

The percentage is even higher in central and western China, where the economy is less developed and the adults have to seek jobs in the cities. It is reckoned that more than 40 percent of the children in Guizhou are left-behind by either one or both of their parents.

However, little was known about the experiences of these children until last January's release of the book Diaries of China's Left-behind Children, a collection of the diaries of the "left-behind children" in Wanfenghu. The book unveils for the first time the inner lives of these young people.

"People tend to have a stereotype about left-behind children, seeing them as pitiful kids who live in poverty and isolation. People think all they need is something to eat and wear. But they are so much more than that," says Yang Yuansong, initiator and compiler of the book. Yang, 34, who teaches at Maocaoping Primary School, was dubbed one of "China's Most Beautiful Rural Teachers" by China Central Television in September.

With 220 diary entries, 12 letters to parents and 21 pictures by 26 children with an average age of 9, the book tells of their joy and sorrow, strengths and fragility.

There are 74 students in the primary school Yang works at, and 44, or 60 percent, are "left-behind children". Many of these students, cut off from their parents and the outside world, have difficulties communicating with others and lack confidence. 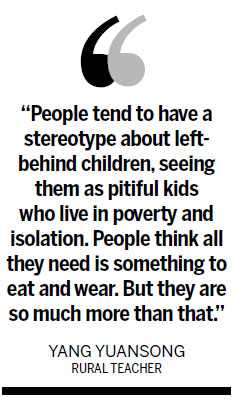 Yang, an amateur writer himself, has always encouraged the students to write diaries as a way to build up their confidence in expressing themselves.

In 2010, a severe drought hit Guizhou. Yang did not take much notice at first as the school had a water cellar. But Yang Haijiao, a sixth-grade student, began to ask for leave every Tuesday and Thursday. She later explained to Yang that she had to fetch water from a place far from home on those days. Her parents were migrant workers in Guangdong province, and she lived with her younger brother and sister and a sick grandmother, making her the only person in the family able to carry water.

Yang Haijiao wrote in her diaries about how hard it was for her to carry the 25-kilogram water bucket, how she was injured on the way back but held back her tears because she didn't want her grandmother to worry and how she struggled to hold the family together while her parents were away.

A Miao ethnic child, she did not learn to write in Mandarin until the fourth grade. But now her expressiveness struck even her teacher.

"I was totally overwhelmed. I think it was because of the power of the impulse to express herself," Yang Yuansong says.

That same kind of power began to show in the diaries of more students. The power was so strong that Yang wanted to share it with more people. He began to compile the diaries and look for a publisher.

"I promised the children that I would publish a book about them, but they didn't believe me," Yang recalls. "Their reaction made me more determined. I want to set an example for them. I want these children to witness that one can realize his dream if only he tries and persists. I want them to know the power of dreams."

Born into a farmer's family in a nearby county, Yang knows the power of dreams. He dropped out of school 13 times because of poverty before he graduated from a teacher's college. But he counts himself as lucky.

"I have always loved writing and wanted to be a writer. I met a teacher in middle school who nurtured and encouraged me to chase my dream," Yang says. "Now it's my turn to do the same for my students."

Yang traveled to Beijing and Shanghai to look for publishers but was refused 10 times. He finally secured a publisher in Jiangsu province to publish the book in early 2012. With an initial print run of 15,000 copies, the book sold more than 100,000 copies in its first few months on the shelves. The left-over children in the school received subsidies from the sales.

The book proved the power of dreams to the students; it also opened their eyes to new dreams.

"Some children didn't have dreams because they didn't know so many vocations exist," says Yang. "Now from contact with philanthropists from all walks of life, they are seeing a bigger world."

However, Yang remains cautious about the attention given to the students. "Whatever we adults do for them, we should keep it to ourselves. They have to know that they are great, but not pitiful," Yang says. "What they really need is a theme of life, something drives them to jump up and try. And they need a listener, a pair of eyes that follows them around. With the limited resources in the school right now, it is very hard for us to realize it for every student. That is where we need outside help."

Yang is now preparing a second volume of the book, which will be released early next year.

Zhao Kai contributed to the story.