To Cui Tiankai, China's ambassador to the United States, China-US relations are like a big ship that will continue to forge ahead despite occasional stormy seas ahead.

In Cui's view, China-US relations have always been based on shared interests, from the initial strategic security needs to the present broadening and deepening shared interests in bilateral, regional and global issues.

"Great changes have taken place in the world, in China and in the United States in the past 35 years, but our bilateral relationship has generally kept its momentum moving forward," Cui told a press briefing on Friday in Washington.

Both nations have benefitted from the relationship. While bilateral trade each year has grown from almost non-existence in the 1970s to approaching $500 billion, China and the US have become ever more intertwined in almost every field.

Cui said that he himself was also surprised to learn that there were 230,000 Chinese students enrolled in US colleges and universities, accounting for nearly 30 percent of all international students here. At the same time, 68,000 American students have studied in China since US President Barack Obama announced the 100,000 Strong Initiative in 2009, whose goal is to send 100,000 US students to China over the next four years.

While China and the US have found more shared interests from trade to security, Cui believes such a relationship goes far beyond the bilateral realm. A stable China-US relationship is not only essential to the two nations, but also to the Asia-Pacific region and the world, according to Cui, who is in his 10th month as China's ambassador to the US.

"So in this sense, maintaining a healthy and steady development of China-US relations is not just in the shared interest of the two nations, but also their responsibility to the world," he said.

A career diplomat, Cui has been a close observer and participant of China-US relations since early on. A 1987 graduate of Johns Hopkins School of Advanced International Studies, Cui had worked as a Chinese language translator at UN headquarters in New York City in the early 1980s and later at China's UN mission in the late 1990s. His responsibilities included North American and Oceanian affairs when he was China's vice-foreign minister from January 2010 to April 2013. 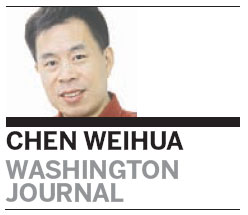 Cui believes China and the US have always been able to find the convergence of shared interests, as well as a new way to tackle challenges.

"The China-US relationship has been future-oriented and continues to evolve with the times," he said. "It has continued to move forward amid win-win cooperation."

Cui believes the bilateral relationship is one based on mutual respect and a proper handling of differences.

"But both sides have been working hard to find convergence of shared interest and effective ways to manage the differences," he said. "Various mechanisms to facilitate communications and dialogue have been set up."

Cui dismissed the hype over China's announcement in November of the East China Sea Air Defense Identification Zone as being an issue of major difference between the two nations. China only added itself to a long list of ADIZs announced a long time ago by countries including the US. "The two sides have open lines of communication," he said.

For Cui, reviewing the past 35 years of China-US relations provides very beneficial lessons on how to push the relationship forward in the future.

He said that the consensus reached by Chinese President Xi Jinping and President Obama in early June 2013 to build a new type of major country relationship has pointed to a clear direction.

The informal summit at Sunnylands, California, has been widely hailed as a milestone for the most consequential bilateral ties to forge ahead in the 21st century.

"With the 35 years of successful experience and with the direction set by the two nations' leaders, I believe China-US relationship, with its sound momentum, will be taken to a whole new level."

Staying ahead of the game

Odierno: US, China to work on issues