The US' plan to create the position of Arctic ambassador and the increasing attention the region is getting from other countries show that competition for the region's untapped natural resources is heating up, experts say.

US Secretary of State John Kerry has sent letters to Mark Begich and Lisa Murkowski, the two senators from Alaska, the northernmost US state, stating his intention to name a "high-level individual of substantial stature and expertise" to serve as Arctic special representative. Kerry sought Begich's and Murkowski's input on creating the post and finding the right candidate.

"For a long time now, I've shared the view that the Arctic region really is the last global frontier, and the US needs to elevate our attention and effort to keep up with the opportunities and consequences presented by the Arctic's rapid transformation," Kerry wrote in the letters, released on Friday.

"Properly managed, this region provides an opportunity for creative diplomatic leadership - but truly establishing and capitalizing on this leadership role will require making the Arctic region a higher US priority; greater attention paid by senior policy makers; and, in keeping with (US President Barack Obama's) call for 'national unity of effort' on the Arctic, coordination of operational departments," Kerry wrote.

The US is set to take over the rotating chairmanship of the eight-nation Arctic Council in 2015. Of the eight Arctic Council nations - Canada, Denmark, Finland, Iceland, Norway, Russia, Sweden and the US - six have ambassador-level Arctic diplomats. 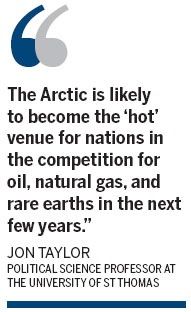 Last year, Begich introduced to Congress the US Ambassador at Large for Arctic Affairs Act. The legislation asked Kerry to make the appointment on economic and national security grounds. Begich's efforts to push for such a post started in 2008 when he first introduced a bill to create an Arctic ambassador, and he has reintroduced it to each Congress.

Calling Kerry's decision an "important step in the right direction", Begich said, "The bottom line is that the changes we see in the Arctic warrant a higher level of involvement from the US".

He added, "This position will allow us to better exercise leadership and vision in Arctic policy moving forward."

Jon Taylor, a political science professor at the University of St Thomas in Houston, said Kerry's decision is not "surprising", given the US will take over the chair position in 2015.

"Considering issues such as climate change, energy and rare earth deposits, and an increase in commercial shipping traffic because of the shrinking polar ice cap, it makes sense for the US to create an Arctic representative position," Taylor said.

The latest development, however, hasn't given any indication of who this ambassador will be.

"I don't have any personnel announcements to make, but we may very well at some point soon, but nothing to announce at this point," Marie Harf, a State Department spokeswoman, said at a news briefing in Washington on Friday.

Created in 1996, the Arctic Council is a high-level intergovernmental forum that addresses issues faced by the Arctic governments and the region's indigenous people. It gradually emerged as one organization that addresses some pressing global issues such as climate change.

The region has gained increasing attention from many nations in recent years. Last year, the council agreed to expand to include six new observer nations - including China - as observers.

Five out of the current 12 countries that have permanent observer status are Asian - China, Japan, South Korea, Singapore and India. The other seven are European.

Experts say that with the ice melting in the region, the Arctic's resources, including oil, gas and minerals, will become accessible, and that will likely create a new global competition as well as economic opportunities.

"The Arctic is likely to become the 'hot' venue for nations in the competition for oil, natural gas, and rare earths in the next few years," said Taylor, the University of St Thomas professor. 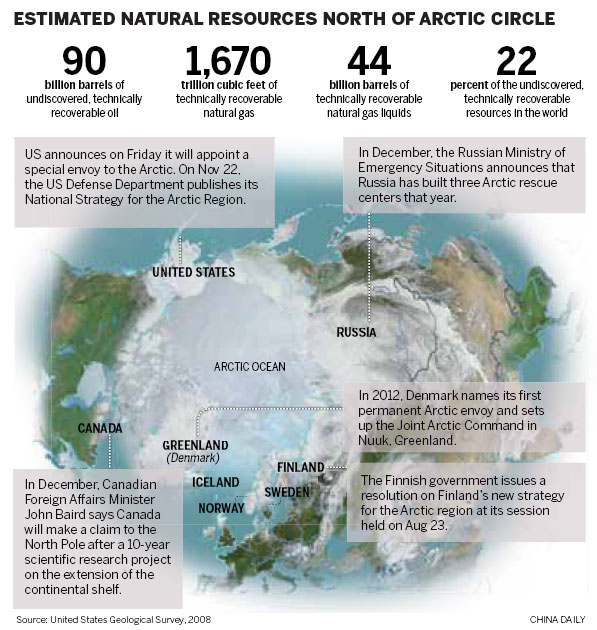 Policeman gets death sentence for shooting

Beijing calls on Tokyo to return plutonium to US

Xi calls on leaders to carry out new reforms

Bigger Chinese role in the Arctic