Growth decline no cause for alarm, forum told

Slowing growth in the world's emerging economies should be viewed as an "adjustment", not a prelude to a global crisis, the head of an asset management firm told a Manhattan economic forum, stressing the need to manage the slowdown through "structured reform".

Issac R. Souede, chairman and CEO of the Permal Group, told the forum on the world economy's status presented by the Americas Society/Council of the Americas that high growth rates in emerging markets were "pumped up by unusual monetary policies".

"I would expect what you are going to see is a slower pace of growth in emerging markets until inflation is gone," Souede, one of four panelists, told an audience at the AS/COA offices. Using Brazil's 2 percent real growth versus 4 percent interest rates as an example, the executive with the London-based unit of the Legg Mason Group of Companies said emerging market growth "is going to be slowing down".

"But it's all in the context of an adjustment, which I don't think is particularly dangerous," he said. "It has to be handled well within political means and there needs to be structured reform. But I don't see anything cataclysmic about it."

Economists of late have lowered their growth rate outlook for China, as it transitions to a consumer and service driven economic model from exports and investment, as well as their growth estimates for nations tied to China's economic health. 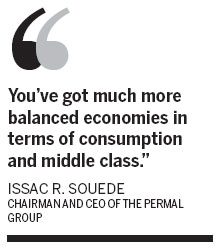 Recent IMF data show that as China's economy goes, so goes the economies of nations such as Argentina, Brazil, Colombia, India and Thailand. By contrast US economic performance affects growth in Chile, Malaysia, Mexico, Russia and Turkey, because of the countries' presence as sellers of products to the North America and European markets.

Concerns about Chinese growth come on top of recent political problems in Turkey and the Ukraine and a currency devaluation in Argentina. The US Federal Reserve's plans to ease its monetary stimulus also raised worries throughout the vulnerable emerging world and contributed to global financial market woes.

Meanwhile, the US economy is gradually emerging from its long downturn while Japan is on the verge of ending two decades of grinding deflation and Europe is once again beginning to see economic stability.

Souede, whose company has assets under management of $22 billion, said the emerging markets are positioned to withstand the latest downturn, helped by the public's consuming of more goods. In the 1980s and 1990s, when Latin American debt and Mexican and Thai currency crises rocked developing economies, the infrastructure was missing that supportive element.

"You've got much more balanced economies in terms of consumption and middle class," he said. "India is 50 percent consumption driven." He said wiser monetary policy also has the emerging world better positioned to climb out of the downturn. "Central banks have acted appropriately," Souede said.