A partnership between a California-based flight school and a Chinese company looking to find pilots for single-engine aircraft is a growth opportunity for both parties, according to one of the school's executives.

"For Channel Islands, this is a business growth opportunity," said Sarah Oberman Bartush, chief marketing officer and flight school manager with Channel Islands Aviation in Camarillo, California. "We are Avieye's exclusive US flight training provider, and they are our exclusive Chinese client, but [this program] will definitely open doors for us.

"The aviation industry is so new in China," Bartush told China Daily on Monday. "They're just opening up the low-level airspace, which is so key to general aviation, and we're getting in kind of at the ground level."

A two-month intensive course in Shanghai kicks off the training program, with prospective pilots taught in English and Chinese.

After the first two months, a group of roughly 20 will travel to the United States to complete the training program, spending 10 months at Camarillo Airport.

Some graduates will return to China to work as pilots for Avieye in Shanghai, while others will continue training to gain flight instructor certification.

A recruitment campaign is underway, and the first crop of pilots is expected in the US by August or September, Bartush said.

A key difference in this case is that pilots will be trained for general aviation, not commercial, she said.

General aviation refers to civil aviation operations other than scheduled air services, and ranges from helicopters to private jets.

Channel Islands Aviation was founded in 1975 and has operated out of Camarillo Airport for nearly 40 years, providing aeronautical services, including fueling, aircraft maintenance and flight instruction.

Channel has been an affiliate of the Cessna Aircraft Co since 1976, operating as a Cessna Pilot Center, Cessna Service Center and a single engine dealer.

"As an affiliate of Cessna, they mentioned they had a company in China that they were working with," she said. "That company was looking for a flight-training partner. So Cessna was an inaugural part in introducing us."

"Most of the training will be in-aircraft here in the US, but there will definitely be a simulator in use," she said.

Local governments and the Aviation Industry Corp of China, the country's leading aircraft maker, have realized the importance and potentially lucrative prospects for the general aviation industry.

Bartush said Channel Islands worked with some other international clients in the mid-1990s for pilot training, but that the partnership with China's Avieye is "much more formalized".

"It was definitely good for us to have that exposure, but this is going to be so much bigger than that ever was," Bartush said.

Bartush said she expects to travel to China later this year.

Zhao Lei in Beijing and the Associated Press contributed to this story. 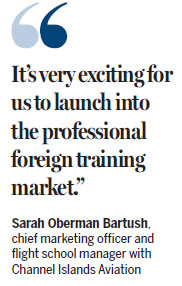 Kerry delays return to US after injury in bicycle crash

Californians turn to Australia to learn how to fight drought