By Niu Yue at the United Nations(China Daily USA)

On May 29, the International Day of UN Peacekeepers, 44 military and police officers from 25 countries were awarded medals for their contributions peacekeeping operations during a ceremony at UN headquarters in New York City.

Among the honorees was Chinese People's Liberation Army Lt Col Dai Qilin, a planning officer with the UN Department of Peacekeeping Operations.

"It is a great honor to be a representing the PLA working as part of the UN peacekeeping operations, which has made great contributions to safeguarding world peace," Dai said after the ceremony.

"The honor belongs to the 2,700 PLA members who are now participating in nine out of 16 UN peacekeeping missions being carried out globally," Dai added. "Their hard work helps bolster China's great image at the UN."

This year marks the 25th anniversary of China's participation in UN peacekeeping operations, which began in 1990 with five PLA soldiers taking part in missions.

Dai said that by the end of 2015, the number of PLA troops serving the UN peacekeeping missions would increase from 2,700 to 3,100, moving China in ranking from the 11th to the 7th among the 121 participating countries. 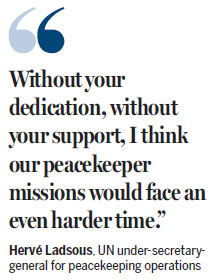 Ladsous said in his remarks that the ceremony held on the special day was in recognition of the contributions to world peace made by international peacekeepers.

"Peacekeeping is the flagship of the UN," said Ladsous. "And it is through all of your efforts that the UN remains relevant, remains a reliable tool to respond to the problems of the world, some of which are intractable."

"This year has been particularly challenging," Ladsous continued. "We have seen operational environments changing, we have seen increasing amounts of difficult tasks put on our peacekeepers, on our patrols, on our camps. We are facing an even more complex and multi-dimensional reality."

"Without your dedication, without your support, I think our peacekeeper missions would face an even harder time," he added.

Ladsous said, the ceremony was also held in memory of the 126 men and women UN peacekeepers who died devoting the lives to peace in 2014, bringing to 3,366 the number who have made the ultimate sacrifice over the years.

This year marks the 70th anniversary of the founding of the United Nations. Over the past 70 years, the UN has established 71 peacekeeping operations. And more than 1 million men and women have served as peacekeepers.

This year, the theme for the day was UN 70 and UN Peacekeeping: Past, Present, and Future.

Kerry delays return to US after injury in bicycle crash

Californians turn to Australia to learn how to fight drought