Jianbing could be the latest authentic Chinese food craze to sweep New York.

Yolanda Li, 25, and her crew serve jianbing, or Chinese pancakes, out of a foodtruck called "The Flying Pig Jianping".

Li said she sells approximately 200 jianbing a day, and "the long queue of waiting clients could sometimes make traffic jams for the pedestrians".

A jianbing's outer layer is primarily made of flour, but there are variations depending on local tastes.

Basic fillings include fried, crispy cracknel (bits of pork fat) and vegetables. Extra fillings range from products such as dried pork floss and pork belly to imported Chinese vegetables such as bamboo shoots, according to the menu.

"The food is authentic Chinese style with a globalized team," Li said.

The five team members of Li's crew come from four different countries. Li and the head cook are from Beijing. The American cashier is of Spanish and Japanese descent. The truck driver is from Mexico and the truck cleaner came from El Salvador.

Li said she spent almost a year starting up the business, including a month studying jianbing technique in Tianjin and almost six months to find a vehicle and license. It took another three months to acquire all the health certificates for herself and her staff.

"This truck is a nice addition to the other Chinese ones on campus," said Bethany Wang, a college student. "It's nice to see something different from the standard fare."

Born into a wealthy family, Li came to the United States at age 15, finishing high school at a prep school in Connecticut after transferring from one affiliated with Renmin University in Beijing. She later attended Pace University in New York, where she majored in art history and business.

Some netizens snarked that her business was not up to her educational background.

Li said that she had tried many different jobs before the pancake truck and learned that "to get along well with people is the most important".

Li once worked at DreamWorks, but eventually concluded that the 9-to-5 routine wasn't for her, even though she learned some important lessons.

"You must experience being employed first hand before starting your own business," Li said. "Young entrepreneurship is not as easy as child's play. You need to get up 5 in the morning and keep working until 2 the next morning."

Li said she cried the first few days in the truck because of overwhelming exhaustion but "would wipe out the tears right before her working hours".

Some customers have said that $7 for jianbing, with an extra $2.50 for a premium filling, is pricey. Li said that her prices are reasonable, considering the high disposable income of many New Yorkers.

Her food has gotten a range of reviews.

"Having found this place is very much like going back home," said Elaine Jiang, a local office worker originally from Beijing. Jiang learned of the foodtruck on WeChat, the Chinese instant-messaging mobile app.

"The food wasn't as impressive as other people have mentioned, and the pancake is a bit too salty in general," said Avery Wang, a first-time client.

"I am confident in the flavor of my food," she said.

Li said the food's quality is her top priority. She uses the same ingredients that would be used in jianbing in China. 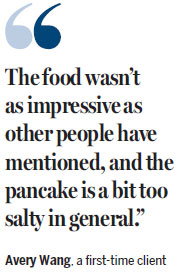