Qigong is catching on 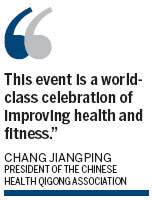 The International Health Qigong Federation (IHQF) is hosting a series of forums and events in New York and New Jersey this week, spotlighting an ancient Chinese practice aimed at improving both physical and mental well being. Rooted in Chinese medicine, philosophy and the martial arts, qigong is intended to balance a person's "intrinsic life energy" through the slow repetition of fluid movements with controlled breathing. Although the practice dates back 5,000 years in China, it has gained popularity in the West in recent years.

"Qigong originated in China and now belongs to people internationally," said Chang Jiangping, president of the Chinese Health Qigong Association. "This event is a world-class celebration of improving health and fitness."

On Sunday, eight experts and scholars spoke at a forum at New York University presenting research findings on the benefits of qigong. Topics covered included the effect of the practice on the mental health of elderly practitioners, by Stanford University Professor Victor W. Henderson, MD; the use of qigong for stress management, by Hochschule Neubrandenburg University Professor Willi Neumann; the impact on relaxation and brain activity, by Johannes Gutenberg University Mainz Professor Wolfgang Immanuel Schollhorn; and psychological and social health benefits, by Wuhan Sports University Professor Shi Aiqiao; among others.

During the event, a demonstration involving 150 people performing qigong was staged in Washington Square Park, with experts providing guidance for new practitioners.

IHQF practices "health qigong," which is a slightly modified version of the art. The organization stresses that qigong is not a religious belief or a medical cure for illness, but instead fosters harmonious relationships between people and within them, balancing spiritual and physical factors.

"The federation wishes to establish an exchange platform for over 2.5 million health qigong fans around the world, to release the latest research and offer an opportunity to meet qigong fans from around different regions to improve their skills and form new friendships," said Wang Lan, secretary general of the Intl Health Qigong Federation of the event, which is being held in the US for the first time. "We are hoping that people will exchange ideas, experience the atmosphere of qigong and receive training from experts."

Beginning today through Aug 24, the fifth International Health and Qigong Tournament will be held at the Sheraton Parsippany Hotel in New Jersey, bringing together 400 participants from 30 countries. A training seminar and examination will also be conducted at the hotel.

Onus on US to improve military ties