Alibaba Group Holding Ltd's announcement that it will end months of market speculation by choosing New York over Hong Kong for what would be the largest US initial public offering ever by a Chinese company has sent shockwaves across the US financial community.

Alibaba, which controls about 80 percent of the Chinese e-commerce market, is "growing at an unheard of pace", analyst Mario Squicciarini wrote in a posting on the Seeking Alpha website.

The company's proposed US listing is the most anticipated IPO since social networking site Facebook raised $16 billion in 2012. Analysts have put the e-commerce giant's market value at around $140 billion and the proposed IPO's value at $15 billion.

Sunday's announcement came just two days after micro-blogging website Sina Weibo - in which Alibaba is an 18 percent shareholder - filed to raise $500 million in a US IPO.

Alibaba has thrived as Chinese consumers increasingly flock to online marketplaces rather than traditional brick-and-mortar stores. The gross value of merchandise traded on Alibaba last year was $240 billion, more than double that of US rival Amazon.com's $100 billion, according to Forrester Research.

Analysts called Alibaba's move to list in the US timely, given the slow erosion of its dominance by Tencent Holdings Ltd, which has rolled out mobile payment services via its WeChat instant messaging app and offers services that overlap with Alibaba's.

"The going-mobile war has just started and it's too early to tell who has a better chance to edge out, leaving investors the opportunity to put a bet on Alibaba," Li Yi, secretary-general of the China Mobile Internet Industry Association, told China Daily. 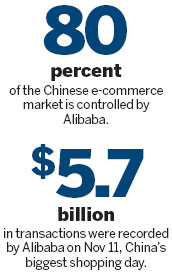 In recent years, Alibaba has increased its presence in China's financial sector. Its Alipay electronic payment system for e-commerce transactions now includes micro lending and financial products that allow users to invest in a money-market fund.

Li said Alibaba's prospects for moving deeper into social networking via Weibo face challenges, given a lack of access points. "It's easy to move from social networking to e-commerce. But the reverse goal, which Alibaba is struggling to do, is hard to achieve," he said in an interview.

Alibaba's and Weibo's announced US listing plans mark a significant change in the character of cross-border listings in the US by Chinese companies. In recent years, the wave of Chinese companies that sought US stock listings included dozens of smaller firms created by reverse mergers - some of which collapsed amid accounting scandals, wiping out some $40 billion of value. The resulting market freeze saw few IPOs from China seek listings on US exchanges and depressed the share prices of Chinese companies which already were trading in the US.

By contrast, the proposed Alibaba and Weibo US IPOs - Alibaba's in particular - are large. Analysts said they are reminiscent of going-public announcements by Shenzhen-based investment holding company Tencent and Beijing-based search engine Baidu Inc a decade ago. Earlier this year, Alibaba e-commerce rival JD.com filed for its own US stock offering, valued at $1.5 billion.

Blending many of the functions of eBay, Google and PayPal, Alibaba stands out as unique among Chinese Internet companies. Even though it doesn't directly sell products on its sites, it is highly profitable because merchants who use its websites pay for advertising and other additional services. For the quarter ended Sept 30, Alibaba posted profit of $792 million, with a profit margin of 44.6 percent, according to Yahoo Inc, which holds a 24 percent interest in Alibaba. Revenue surged 51 percent from a year earlier to $1.78 billion. For the same period, Amazon reported a loss of $41 million on revenue of $17.09 billion.

Yet, although Alibaba is an e-commerce juggernaut, it is not well-known in the US. In a statement posted on its website Saturday, the Hangzhou-based company said its US IPO would "make us a more global company and enhance the company's transparency".

As more online users migrate to mobile devices, Alibaba's stake in Weibo, which is potentially expandable to 30 percent, has become even more valuable. Despite being confined mainly to Chinese-speaking users, Weibo, a unit of Sina Corp, has become one of the world's most talked-about social networks. It claimed 129.1 million monthly active users as 2013 ended, compared with Twitter's 241 million.

Alibaba's investment in Weibo last year valued the messaging service at about $3.3 billion. Though its prospectus on Friday gave a fund-raising goal of $500 million, the company may aim to raise more.

Alibaba's decision to start the process on a US IPO ended speculation whether the company would opt for a New York listing instead of choosing Hong Kong, its hometown stock exchange. The Asian exchange refused to approve Alibaba's partnership structure, in which a group of insiders, including founder Jack Ma, control the board despite owning a minority of shares. The Hong Kong exchange's rules prohibit dual classes of shares and other arrangements that give shareholders more than one vote per share.

News reports had said that if Hong Kong regulators failed to approve Alibaba's board-nomination request, the company would switch the listing venue to New York, where such a corporate structure is allowed and already used by Internet giants Facebook and Google, among others.

"We wish to thank those in Hong Kong who have supported Alibaba Group," the company said in its post. "We respect the viewpoints and policies of Hong Kong and will continue to pay close attention to and support the process of innovation and development of Hong Kong."

Hong Kong had been looking for a heavyweight such as Alibaba to revitalize its IPO market, which was a top global destination for IPOs from 2009 to 2011, before a slowing economy dried up filings.

Alibaba's proposed listing promises to bring a windfall to major shareholders including Yahoo, with a 24 percent stake, and Japan's Softbank, with 37 percent. Topeka Capital Markets analyst Victor Anthony wrote in a report that Alibaba's US listing will attract investors who typically only invest in US-based companies. Anthony said he sees the initial share sale from the offering producing after-tax proceeds of $9.3 billion for Yahoo, based on analysts' projected $150 billion valuation for the Chinese company.

He Wei in Shanghai contributed to this article.

WeChat to take on WhatsApp

US not to recognize Crimean referendum

Alibaba opts for IPO in US