US experts disagree that China's currency would be a major issue of discussion as US Secretary of the Treasury Jacob Lew winds up his trip in Beijing on Tuesday evening.

Lew said on Friday that he would press Chinese officials to allow the market to play a bigger role in determining the value of China's currency after acknowledging China's steps in reforming its exchange rate policy.

"They widened their trading band. But we've seen some very negative movement in the exchange rate in recent months," Lew told Bloomberg. Nicholas Lardy, a senior fellow at the Peterson Institute for International Economics, said Lew has focused on the depreciation of the yuan over the last few months.

"I think there has been no fundamental change in Chinese exchange rate policies other than the central bank not wanting to discourage carry trade transactions," he said.

Carry trade refers to a strategy in which an investor sells a certain currency with a relatively low interest rate and uses the funds to purchase a different currency yielding a higher interest rate.

"One way of doing that is having more two way movement of the exchange rate," Lardy said, adding that he is looking at longer-term trends, rather than short term.

The yuan has depreciated 2.9 percent against the US dollar since January 1 this year, but it has appreciated some 35 percent since 2005.

Eswar Prasad, a senior fellow at the Brookings Institution and a professor at Cornell University, said the pressures on the yuan appear evenly balanced and should in principle make it a less contentious issue between China and the US.

"With China's trade and current account surpluses still at low levels, it is hard to make a case that the renminbi is significantly undervalued based on short-term macroeconomic fundamentals," said Prasad, author of the new book The Dollar Trap - How the US Dollar Tightened its Grip on Global Finance.

But he said the US administration clearly remains concerned about the rising US bilateral trade deficit with China and the extent of foreign exchange intervention by the People's Bank of China, especially in the first quarter of 2014. 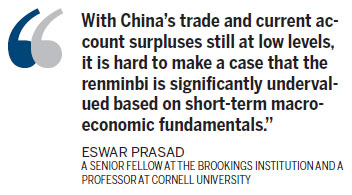 Gary Clyde Hufbauer, a senior fellow at the Peterson Institute, said Lew was speaking to two audiences - Chinese officials and the US Congress - about the currency issue. "The audience on Capitol Hill is more important," he said.

Prasad, a former head of the IMF's China division, believes discussions about the yuan's value at the moment are a distraction from the more important bilateral issues between the two countries, including market access, protection of intellectual property rights and the major economic and financial market reforms that China is embarking on.

"These reforms, which the US supports in principle and could also support more directly by providing technical assistance and guidance, are in the mutual interests of the two countries as they can make China's growth more balanced and sustainable," he said.