In addition, snow leopards are also at risk from poachers, who can sell their fur for several thousand dollars in large cities of eastern China. Snow leopard bones are also increasingly being used as a replacement for more expensive tiger bone in traditional Chinese medicine, while live snow leopard cubs, often orphaned by poachers, are also captured and sold to circuses and public and private zoos for as much as $20,000 each.

Another threat to snow leopards comes from the demand for cashmere. It is indirectly leading to the killing of the big cats.

"Your cashmere sweater may well be a threat to snow leopards!" said the first paragraph in the 2014 summer newsletter of the Snow Leopard Trust. 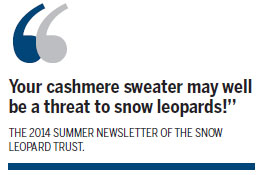 Demand for the fiber has skyrocketed globally and farmers are earning good profits from tending herds of cashmere goats. Across Asia, farmers have enlarged their flocks to earn more. The main countries farming cashmere goats are Mongolia, northern India and northern China. Herds in Mongolia alone have grown from 5 million goats in the early 1990s to 14 million in 2010, according to researchers.

"Farming cashmere is a complex matter," Charudutt Mishra of the Snow Leopard Trust said in the newsletter. "The farmers want to earn more money to improve their lives, but their gain is at a cost to the snow leopard. They need to understand the problem and everyone needs to adapt farming policies to accommodate endangered species while working to support the financial needs of the farmers and their communities."

Mishra said, "You don't change an industry overnight. Establishing sustainable cashmere production standards and building a brand that can bring such a product to market will take several years."

He said the trust wants to work with cashmere farmers and select buyers to set up a program that would encourage more sustainable grazing practices and conservation commitments from the farmers "to produce Snow Leopard-Friendly Cashmere, a label which can, in turn, fetch premium prices for both the herders and the industry."

Xi calls for economic corridor with Russia and Mongolia

VW and Chrysler hit with fines for price-fix