China the perfect home for startups

China’s aspirations to rival Silicon Valley for world-changing innovation and the country’s low labor costs have made it the perfect home for Western startups to commercialize their new technology, entrepreneurs say.

“China’s high-technology manufacturing strength will help the country to stay competitive on the technology scene over the next decade at least,” said Qiao Huijun, an investment partner of Angel Plus, a Chinese fund.

“We can help many Western firms turn their brilliant laboratory innovation into profit-generating products that will sell on the market. As China’s real economy and property market slow and the stock market remains volatile, there is increasing availability of capital to fund domestic and global startups that are likely to lead the next phrase of China’s growth and knowledge economy creation.”

China’s domestic startup scene is thriving, helped by opportunities in technology and service industries emerging as a part of the country’s structural shift.

The availability of capital, large consumer market and high-technology manufacturing capability have proven to be highly attractive for new Western startups, and many agents and funds are now helping their entry into China.

Last month Angel Plus opened a new incubator in London to help technology-oriented British firms commercialize their technologies in China, after the successful launch of a similar incubator in Silicon Valley in January.

Its business model works by investing in selected technology firms within its incubators, and provides engineering and manufacturing support to them using its fleet of in-house engineers and its own manufacturing factories, and then uses its marketing strength to sell the commercialized products to China’s massive consumer market.

One example of a Silicon Valley firm it invested in is a motion sensor technology company that makes tennis apparel adapted to a player’s posture.

“They had great technology but manufacturing costs were about $300 for each sensor,” Qiao said. “Our engineers worked alongside their R&D team to take production costs right down to $15 for each sensor, which made large-scale commercialization viable.”

The Angel Plus team of engineers provided support from industrial design and mechanical design through hardware and software improvements, and Angel Plus’ own production facility cut negotiating costs with third-party manufacturers.

“Because our engineering support is so comprehensive, we had to really limit the industries represented by the companies we accept into our accelerators, as our engineers only have expertise in certain fields,” Qiao said.

As with Angel Plus’ overseas incubator project, many individual Western startups have realized what China has to offer their innovative solutions, and many Chinese entrepreneurs who founded their firms in the West are realizing the great value of their China connections.

Chen Fujia, a PhD graduate of Oxford University and founder of Oxford Space Structures, has used her understanding of aerospace technology and the university’s research and development facilities to develop a baby cot that can be folded and unfolded in seconds, and which has became the core product of her business.

The technology is so exclusive that Oxford Space Structures has attracted 200,000 pounds ($285,000) of private investment capital in Britain only two years after the company was set up. Chen was aware that China’s manufacturing strength is the key to helping SpaceCots become commercially viable, and that the size of the Chinese market would be critical in the company’s growth.

Oxford Space Structures set up an office in Suzhou Industrial Park in Jiangsu province to manage the manufacturing side of the business, which is outsourced to a Chinese manufacturing firm. The company said it expects to make 1 million SpaceCots this year.

“China is a very big market for baby products, and its rising middle class is increasingly able to afford high-end consumer products,” Chen said, adding that she expects that it is in China that sales of SpaceCot will be largest in the next few years.

In addition to the sheer size of that market, the newly emerged Chinese consumer market’s willingness to try new ways of buying is also making it highly attractive for Western startups that hope to make an impact but cannot compete with deeply rooted incumbents in their markets.

The UK startup Reward Technology has developed a new way of engineering supermarket discounts, so that a store detects loyalty cards in customers’ pockets as they walk in and automatically generates a selection of the most suitable promotions based on a customer’s shopping habits, and sends this list to the customer’s phone as a text message.

The firm is registering the patent for the technology in China and is speaking to different Chinese investors in the hope that they can invest more capital in the business, said its chief executive, Paul Sheedy.

“We will target our technology at Chinese local supermarkets, which are struggling to keep up with competition coming from Western supermarkets entering China, like Carrefour, Tesco, Marks & Spencer. This could be a real game changer for Chinese supermarket chains.”

The technology is much harder to market to Western supermarkets that are the incumbents in this market and are already used to the idea of paper vouchers.

“For years they have worked with external data analysis companies that have a vested interest in ensuring their positions are not challenged by companies like Reward Technology.”

Tesco has worked with the data analysis firm Dunnhumby for 20 years, and Sainsbury with Aimia for 12 years, so these large supermarkets are unlikely to change who they work with.

“Chinese supermarkets are more flexible in their choice of partners and are more adaptable to new technology,” Sheedy said.

The alliance works with universities, think tanks and incubators to host competitions through which it identifies promising startups. The alliance’s London subsidiary, IUIA Ventures UK, was set up in October during a visit by President Xi Jinping to Britain. IUIA is setting up subsidiaries in the US and Singapore.

It is in partnership with between 70 and 80 universities globally, and its vision is to expand this network to 1,000 partner universities in the next three to five years, said its secretary general, Sun Wansong.

IUIA was founded with support from many Chinese government agencies, including China Investment and Promotion Agency of the Ministry of Commerce, the Torch High Technology Industry Development Center of the Ministry of Science and the Technology, and Foreign Expert Bureau.

It has also set up joint-venture companies with Chinese mainland companies to invest in promising projects. It has already invested in three companies, in the US, Hong Kong and Canada, all of which are startups intent on expanding into the mainland. 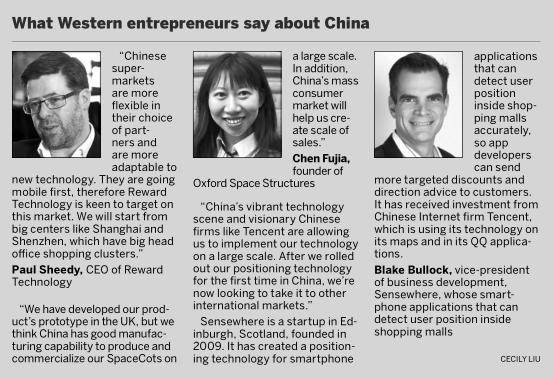