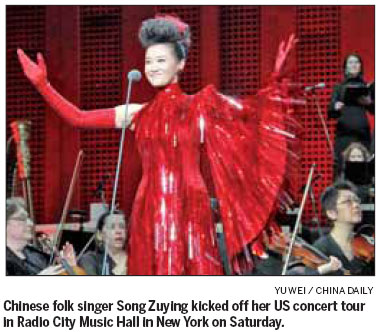 During the two-hour show, Song performed 20 traditional Chinese folk songs including Jasmine Flower, Spice Sister and Good Days. She finished her set with the rousing Dragon Boat Song and encored with the audience singing along to Our Love for China.

"I hope the audience can feel the endless beauty of music as well as the greetings and good wishes from China through my songs," Song said at a news conference before the concert.

Song, one of the most renowned sopranos in China and widely known as the "Queen of Chinese folksong", has been busy on the international stage in recent years. Born to a Miao ethnic family in a remote mountain village in Hunan province, Central China, Song has given recitals at the Sydney Opera House, Vienna Musikverein Golden Concert Hall, the John F. Kennedy Center and London's Royal Albert Hall.

All her songs are performed in Chinese, but that does not lessen foreign audiences' appreciation of the traditional art form, said Lisa Robb, executive director of New York State Council on the Arts.

"In general, with traditional art forms, they are not presented to a new audience in a language the audience is familiar with," said Robb, who delivered a letter from New York State Governor Andrew Cuomo congratulating Song on the launch of her US tour.

"I like her music and she is just a beautiful performer," said Robb. "Her art history and her technical ability are incredible."

"This is the first time I've attended a Chinese concert and I think it is magnificent," said Steve Oesterle, CEO of Sabre Companies LLC, an oil and services company in New York. "She has such an amazing voice. You don't have to understand every word to appreciate the beauty of the music."

Appearing as Song's guests on the show were tenor Tsewang Dorjei and Sha Baoliang, a well-known Chinese singer. They were backed by the Collegiate Chorale Singers and the American Symphony Orchestra, under the baton of Xia Xiaotang, one of China's prominent young conductors.

"It is amazing to see how a US chorus performs Chinese songs," said Mu Ge, a Chinese student from New York University who attended the concert.

The orchestra presented music from China and the West, including the Spring Festival Overture as the opening piece and the overture from The Marriage of Figaro.

"The cultural communication between US and China was the essential feature of the concert and I hope the US audience will have a better understanding of China's long musical history after Song Zuying's performance," said Tan Tianxing, deputy director at the Overseas Chinese Affairs Office of the State Council who is in charge of Song's US tour.

"I believe the audience can feel the charm of Song, and the striking features of Chinese national vocal music through her confident, peaceful, friendly and sweet voice," Tan said.

Song's US concert tour is part of the "Cultures of China, Festival of Spring", an annual event organized by the Overseas Chinese Affairs Office of the State Council since 2009 to help promote Chinese culture and celebrate Lunar New Year. Previous artists on the tour have included Yan Weiwen, Tan Jing and Wang Hongwei,

New York is the first stop of Song's tour. She will perform three shows in Washington from Tuesday, and will be in Los Angeles on March 1 and San Francisco on March 3.