Concern among Chinese after blasts 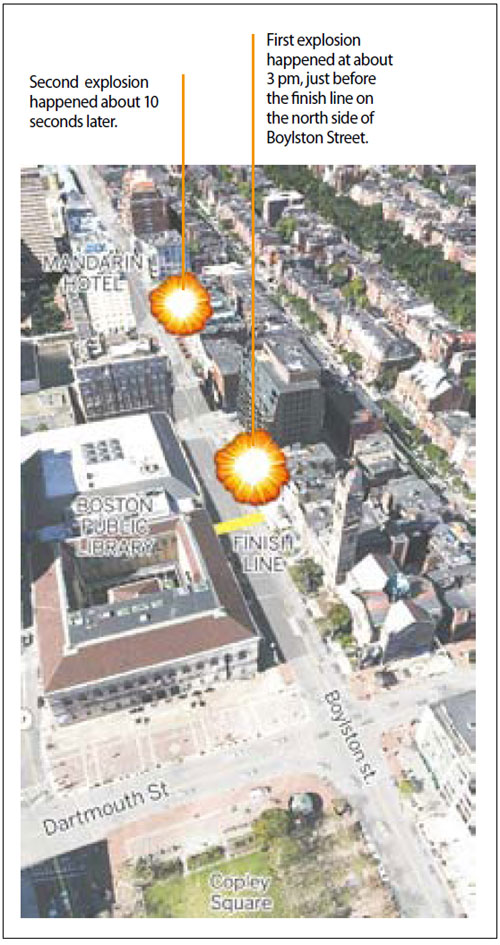 The Chinese community in Boston has been shocked by the deadly explosions in the city and is anxious about friends and colleagues who may have been involved in the marathon.

Zhonghua Liu, a third-year PhD student in the department of biostatistics and epidemiology at Harvard, was waiting for the M2 Cambridge-Harvard shuttle bus to go back to the public health campus when he learned about the explosion.

The shuttle usually runs every 10 to 15 minutes during rush hours, but it did not show up until one hour later because of traffic jams and detours caused by the explosion.

"Everyone was nervous," he said, "calling friends, checking Facebook and Twitter for latest updates. Luckily, none of my friends were injured."

News of the explosions via the Internet also caused concern to families in China.

"My mom called me right after she got up and saw the news online," said Jiang Hong, a first year MBA student at Boston University. "She was greatly relieved when she learned I was nowhere near the explosion."

Jiang also called friends and classmates to check on their safety. Quite a few of them had gone to watch the marathon and one of his classmates Lu Wentian was a volunteer.

According to The Harvard Crimson, the students' daily newspaper at the university, unconfirmed bomb threats on campus and at various locations throughout Cambridge prompted university officials to close Harvard Kennedy School and cancel extension school classes on Monday afternoon. So far none of the threats have been deemed serious. Almost 600 Chinese students study at the American university.

The Harvard campus was locked up, with only the gate to the bookstore left open. Students and staff are required to present ID to enter the yard.

Ambulances were everywhere, Liu said. He said there seemed to be an arrest in front of the MIT entrance involving many police when his bus was passing by the MIT campus.

The Harvard Crimson also encouraged viewers on its official site and Facebook page to report updates from friends, professors, staff and other Harvard affiliates who were at the Boston Marathon at the time of the explosions.

The Crimson updates a list of individuals confirmed to be safe.

Till 8:41 pm, 85 Harvard affiliates have been confirmed safe. Based on their surnames, 10 Chinese are on the list.

Yin Xi, an assistant professor of Physics at Harvard, is among the 85 runners on the Crimson list."I finished the marathon quite some time before the explosion took place."

Yin said: "I learned about it when I was resting with my friends at a hotel room downtown. In fact I have about 15 Chinese marathon runner friends at the race today and some more friends who watched and volunteered for the race."

He said none of his team was hurt, even though a few of them were at the site just 15 minutes before the blast.

According to a Chinese post-doctorate student who works at Massachusetts General Hospital and wished to remain anonymous, more than 20 patients were rushed into the hospital's emergency room.

MIT police have urged people to stay away from Boston if possible, according to MIT Emergency Information, the school's official emergency site.

Li Rui, a fourth-year doctoral student at MIT, where almost 700 Chinese students are studying, said all his friends are safe.

But the father of one of them had gone to watch the marathon. Although he was close to where the explosions took place, he was uninjured.