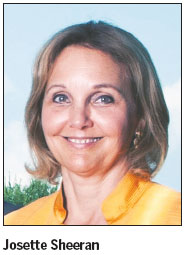 Josette Sheeran, former vice-chairwoman of the World Economic Forum, has been named president and CEO of the Asia Society, the New York-based organization announced on Tuesday.

Sheeran, who in 2011 was named the world's 30th-most-powerful woman by Forbes magazine, has also served as executive director of the United Nations World Food Programme.

"What I've learned on the front lines of global challenges is that no global challenge can be tackled today without Asia, whether it's energy, water, trade, sustainability or general diplomacy," Sheeran said. "I really feel that working to bring Asia and the US together to promote innovation and new approaches to challenges in the way Asia Society does is incredibly exciting."

The Asia Society, founded in 1956 by philanthropist John D. Rockefeller III, is a leading nonprofit institution devoted to public education about Asia. It regularly hosts talks and forums, including many on China, by experts in various fields. The museum at its New York headquarters is home to the Rockefeller collection of Asian art and presents rotating exhibits from several Asian countries.

Sheeran, who will begin in her new job on June 10, will be based in New York. The Asia Society also has offices in Washington, Houston, San Francisco, Los Angeles, Shanghai, Hong Kong, Seoul, Manila, Mumbai and Sydney.

Through the World Economic Forum, which convenes the annual Davos and Davos in China gatherings of leaders in government and business, Sheeran has helped advance programs such as Grow Africa, which has attracted $4 billion in investment to combat hunger and malnutrition.

"Josette Sheeran is a proven executive with a long and successful record of global leadership, and far-reaching diplomatic experience with the nations of Asia," said Asia Society board co-chairwomen Henrietta Fore and Ronnie Chan said in a statement.

"There are two major criteria for a position like this: global leadership and an executive management record," he said. "She has that experience in spades, and is hugely qualified. She could have done a lot of things with that skill set, and we're thrilled that she's joining Asia Society. Most importantly, she seems energized by us and all the different things we do."

One of Sheeran's first projects will be the launch this fall of a global policy institute at the Asia Society that she hopes will tackle issues involving the economy, food and energy. Also, the organization will continue to strengthen its educational programming in the arts, business and public policy.