The global gold price dropped 13 percent in the first quarter, but the demand for gold in China climbed to a record high.

Gold jewelry demand in China surged to a record quarterly value of 60.3 billion yuan ($9.8 billion), according to a report released by the World Gold Council.

The Spring Festival period fueled buying in January, but demand was supported throughout the rest of the quarter as Chinese investors, discouraged by the weak domestic stock market increasingly relied on gold to fulfill their investment needs. The impending controls to be placed on the property market placed further emphasis on gold as an investment option. Spending on consumer goods will slow

Sales of consumer goods are expected to slow this year, and will be driven mainly by private consumption rather than public spending, according to a new report.

Spending on consumer goods will grow 13 percent year-on-year, lower than in previous years, according to the 2013 China Consumer Market Development Report released by the department of consumer economics at the Chinese Academy of International Trade and Economic Cooperation of the Commerce Ministry.

Zhao Ping, deputy director of the department, said fewer government stimulus policies will back consumption this year, and in addition, the government measures to crack down on corruption - banning lavish banquets and spending on luxury products using public funds - will curb overspending and the sales of luxury goods. (Photo 2)

Restaurant tables and home dinner tables are the two main goals of Steve Olson each time he visits China. And it's turkey he wants at both places.

Olson has been to China seven times since 2004. On each visit, the executive director of the Minnesota Turkey Growers Association aims to get his favorite fowl more widely accepted.

A $90,000 grant from the US Department of Agriculture Emerging Markets Program funded this trip by Olson and the two state officials.

Minnesota is the top turkey-producing state in the United States, raising 47 million of the birds annually. In 2011, the Chinese mainland ranked second among US export destinations for turkey exports, at 82.9 million pounds (37.6 million kilograms), behind Mexico with 399 million pounds.

China's pharmaceutical distribution sector should make consolidation and integration the top priority, according to a report by international services firm KPMG.

During 2011 and 2012, China saw 56 deals in the pharmaceutical distribution sector compared with 34 in the United States, 18 in Japan and five in Germany.

Over this period, 43 of the deals in China had a total transaction volume of $2.8 billion, much lower than the size of deals in the US where the combined transition volume of 19 deals among its 34 reached $6.6 billion.

The significant differences were mainly attributed to the fragmented China market. The distribution industry is headed for inevitable consolidation to deal with this high level of fragmentation, encouraged by government support and the aspiration of companies for self-development, said Norbert Meyring, head of KPMG Life Science in China and Asia-Pacific. (Photo 3)

China is most financially secure country

China is the most financially secure country in a survey of 13,000 households in 14 European countries and five Latin American countries.

China scored 78 out of 100, the highest score of any country in the index by PICC Property and Casualty Co Ltd, the largest non-life insurance company in the Chinese mainland, and Genworth Financial Inc, a Fortune 500 insurance holding company. The index was launched in 2007.

"While Chinese households are very positive about their financial situations, they do have a number of short-term to medium-term concerns regarding job security, credit viability and income stream," said Henry Chang, general manager of Genworth Consulting Services (Beijing).

China's growing local government and corporate debt require authorities to work on solutions to reduce the risk of a hard landing, according to experts.

Rising social spending, shrinking revenues from land sales, diminishing or negative returns on investments and deteriorating cash flows have become major issues of concern for local governments which are facing growing debts due by the end of this year.

"A comprehensive plan must be drawn up to deal with debts, which may include financial measures that help to realize asset swaps and push forward debt restructuring," said Liu Yuhui, an economist with the Chinese Academy of Social Sciences. "It is dangerous to allow a huge amount of bad loans to remain in the banking system, which will tighten liquidity."

Tencent Holdings Ltd, a major Internet services company in China, has overtaken Facebook Inc in terms of brand value, boosted by its rising revenue and large number of loyal users, according to a survey.

The Shenzhen-based company has seen a 52 percent rise in brand value compared with last year, according to the BrandZ Top 100 Most Valuable Global Brands study, commissioned by WPP and conducted by Millward Brown Optimor.

The ranking is compiled using the views of potential and current buyers of a brand, alongside financial data.

China's first-quarter trade surplus figures were over-inflated by hot money smuggled into the country to profit from interest rate differentials and investments in the real estate and financial sectors amid the yuan's appreciation, according to economists.

If the fake transactions, which were disguised as trade payments, aren't taken into account, the real surplus for January-April was about $6 billion, about one-tenth of the official $61 billion figure, said Lu Ting, an economist at the Bank of America Merrill Lynch in Hong Kong.

That would be the smallest trade surplus figure in the January-April period after the country reported a $10.8 billion deficit in 2004, Lu added.

Microsoft to add thousands of jobs

Microsoft Corp will add several thousand employees to its work force in China as part of its long-term investment in the country's growing market for cloud computing and other "enterprise" software, an analyst says.

CEO Steve Ballmer' made the announcement on Wednesday at a news conference in Shanghai and didn't provide a specific number for new workers. The Redmond, Washington-based company currently employs 4,000 people in China.

Solar negotiations with EU break down

First-round talks between China and the European Commission over a solar trade probe have broken down, and the European Union halted further talks until the investigation's preliminary determinations are published.

Media reports have said that the commission is planning punitive tariffs ranging from 37.3 percent to 67.9 percent. (Photo 4) 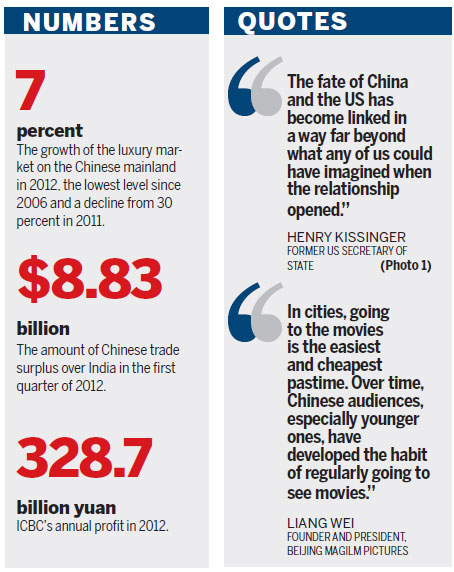