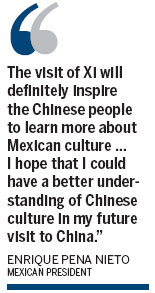 What is one of the common denominators in Chinese and Mexican cultures? President Xi Jinping offered an answer: They both had storied ancient civilizations.

After his trip to Chichen Itza, Xi flew to California, where he is expected to meet with US President Barack Obama on Friday. Officials from California, including Governor Jerry Brown and Los Angeles Mayor Antonio Villaraigosa, both of whom visited China in April and May and met with Xi, welcomed the Chinese president.

During the Thursday morning event at Chichen Itza, Xi was accompanied by Mexican President Enrique Pena Nieto and his wife on a tour of the archaeological site, which was a large pre-Columbian city built by the Mayans.

Xi and his wife Peng Liyuan, dressed casually for the event, received a warm welcome at the entrance of Chichen Itza from a group of Mexican children. The children waved national flags of China and Mexico and sang Mexican folks songs.

The couple then visited ancient remains at the site, such as El Castillo, which is also known as the Temple of Kukulkan and is a step-pyramid at the heart of Chichen Itza. During the tour, Pena Nieto gave a brief introduction of the site and told the Chinese president how ancient Mayan civilization influenced the Mexican culture.

Xi said both China and Mexico have distinguished cultures. Historically, the two cultures may have interacted along the ancient "maritime silk road".

Xi said the world is colorful and diversified. Different civilizations and cultures can prosper only if they maintain their own features and also tolerate others. He said China and Mexico should have more civil exchanges to lay a foundation for an "overall strategic partnership".

Pena Nieto said the friendship between Mexico and China was strengthened at Chichen Itza on Thursday.

"The visit of Xi will definitely inspire the Chinese people to learn more about Mexican culture," he said. "I hope that I could have a better understanding of Chinese culture in my future visits to China."

Chichen Itza is located in the eastern Yucatn state in Mexico. Built in the 5th century, Chichen Itza was once the most prosperous city in ancient Maya and now remains a testimony to the Mayan culture.