A new lens on American history 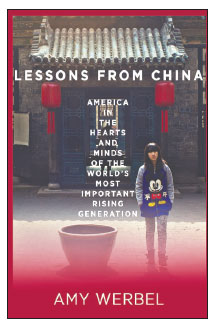 In the autobiography Narrative of the Life of Frederick Douglass, An American Slave (1845), the escaped slave and abolitionist wrote about the forced separation from his mother he endured as a child. Teaching the book to Chinese graduate students in Guangzhou, Fulbright Scholar and American Studies professor Amy Werbel was surprised at the intensity of her students' reactions.

One student wrote that the separation of child from mother was worse than genocide, the severance of family ties a grave and unforgivable crime. Another wrote that such a separation was designed to weaken the unity of a people, and rob them of cultural identity.

Later, on a visit to one students' home in an out of the way village, in which generations had lived despite accumulating wealth, Werbel came to understand the deep reverence Chinese culture has placed on family, tradition and ancestry. In that context, the weight of Douglass' separation from his own mother took on a significance that she had never considered.

That revelation, and many others, fill Werbel's new book, Lessons from China: America in the Hearts and Minds of the World's Most Important Rising Generation.

"My Chinese students made me rethink how I understand American history, because they saw it with such fresh perspective," Werbel told China Daily. "Getting out of my culture and looking at it from thousands of miles away, I could suddenly see the sweep of American history in a larger framework. I found myself asking bigger questions, and I could see how much of China's circumstances today give a sense of dj vu in relation to where America once was."

As a Fulbright Scholar assigned to teach at Guangdong University of Foreign Studies from 2011-2012, Werbel covered a span of US history, literature and pop culture. The ways in which her students responded to the material surprised and challenged her assumptions, and made reading the results of her homework assignments incredibly interesting, she said.

Here in the US, the cultural cache of the 1960s is rarely questioned. The era signifies a stylized and romanticized rebellious spirit, associated with a catalogue of music that still resonates today. But Werbel's Chinese students reacted with criticism to texts by Timothy Leary, and music by Jimi Hendrix. 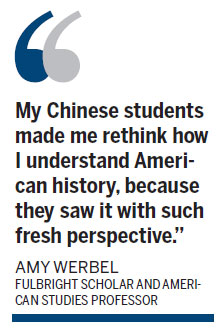 Leary, a former Harvard professor who became the unofficial spokesman for the mind-opening effects of LSD and other drugs in the 1960s, got a Marxist work-over. (Text from students writing in their second language remains unedited for grammar.)

"Born in an era of material affluence, some young rebels did question the value of rampant materialism," one student wrote. "But the fact that drugs, especially the LSD, were used to construct a mental health by creating hallucinatory experience did indicate that their mental fulfillment, if there really was any, relied heavily on the materialistic condition. In this sense, young rebels themselves were more soaked in materialism instead of rebelling against it."

Another student focused on the societal instability to which the hippy counter-culture had contributed, deeming the entire movement irresponsible and selfish.

Of the conservative backlash to the counter-culture movement at the time, one student wrote: "The conservative group's attitudes and beliefs were unfair to the black and the unfortunate, but their actions were more beneficial to the social order and economic stability."

In another class, students seemed to relate much more to Andrew Carnegie's arguments in favor of wealth disparity as a necessary evil, than to any idea of Communism. The students had grown up in a world in which capitalism was the norm, socialism an outdated mode of financial governance.

Chinese female students reacted with surprise that there was ever a time in which American women were denied birth control, an idea they had trouble wrapping their heads around in the context of the one child policy, Werbel noted.

She was surprised at the freedom she was given to teach American texts, particularly the material on protest movements and counter-culture, she said. But most noteworthy was the "hunger" with which her Chinese students reacted to the opportunity to employ critical thinking and debate in the course. The students often requested extra homework, or additional reading from authors who resonated with them.

"They were so incredibly smart, and as the semester developed they really seemed to rise to the opportunity to be more playful in the classroom," Werbel said. "I try to make history complicated, to build critical-thinking skills and to help my students consider different perspectives. They wanted more opportunities to think critically. Their take on US culture was very different, but it wasn't anti-American either. They were open."

On the other hand, there was a sense of realism about the inevitability of certain circumstances, she noted. In discussing the gradual dying out of Native American customs and cultures in the US, students spoke about the languages of their own grandparents with an acceptance that minority cultures would eventually disappear. They could recognize the value in preserving traditions, and yet didn't seem to feel they had the ability to prevent extinction of those traditions.

"When you live in an environment where your city is different every single year, your experience of change feels out of your control," she said. "Interestingly, people felt that way in the US in the 19th century, and the attitude was 'Get on board or drown.' You see that today in the way students in China think."

Although Werbel expected to learn about China, the students she taught had a surprising amount to teach her about her own culture, she said.

"Of course I hope I made an impact on my students, but really I'm grateful for them too, because I know it's changed the way I teach American history," she said.