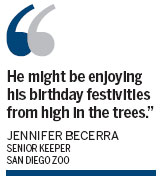 It's time to bake a birthday cake, wrap some presents, and take them to the San Diego Zoo on Monday - for the first birthday of a US-born male giant panda.

Named Xiao Liwu, which means "little gift", he is the sixth cub of 21-year-old giant panda Bai Yun, a female who has been on research loan to the US from China since 1996.

"I placed the order for Xiao Liwu's birthday cake on July 1," said Jennifer Becerra, a senior keeper at the zoo. "It takes our Forage Team around a month to plan and create their world-famous ice cakes.

"I continue to be amazed at what they can do with ice, and so are the bears! The cake is always bigger and better than the year before," she said.

She also warned fans to be prepared for a hard-to-see birthday boy. "He might be enjoying his birthday festivities from high in the trees," she said. "That's where he goes if anything makes him a little nervous."

While celebrating Xiao Liwu's birthday, the San Diego staff also have their fingers crossed for the twin pandas in Atlanta two weeks ago, who supplanted Xiao Liwu as the newest surviving giant panda babies born in captivity in the US.

"Panda mothers in Chinese breeding centers have allowed us to watch a variety of their responses to a twin birth," she said.

"It would be interesting to follow those mothers through multiple years to see if their strategy changes with each twin birth or if you can predict that a female who has attempted to rear twins once will do so again in the future," she said.

Like their Chinese counterparts, San Diego Zoo giant panda researchers have spent a lot of time trying to figure out what factors play a role in determining which twin cub a panda mother selects for nurturing.

"Our work is using data compiled from Chinese breeding centers and twin births around the globe throughout the known history of giant pandas in captivity," she said. "Soon we will be able to answer several of these questions."