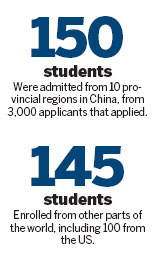 Among the students, 150 are from China and 145 from other parts of the world, including 100 from the US. Faculty members, with quite a few from New York and the US, also arrived at the temporary campus of NYU Shanghai. The new permanent campus - still under construction in Shanghai's financial center in Pudong - is expected to be operational by next year.

Yu Lizhong, former president of East China Normal University and now president of NYU Shanghai, told the students on their arrival that he hoped to make history with this school in China.

While there are hundreds of joint programs between Chinese and foreign universities in China, NYU Shanghai was the first full-fledged university with an American background. It is also the third global campus of NYU after its home in New York City and its second campus in Abu Dhabi.

NYU Shanghai's Chinese partner is East China Normal University in Shanghai, a prestigious institution in China with a history dating back to Saint John's University founded by the US Episcopal Church there in 1925.

Qualified foreign universities can conduct joint programs with Chinese partners, but the requirements are strict and the application process can grind on for years.

European and Australian universities, which were more adventurous and patient, started programs in China years ago and already have a few established success stories, such as the University of Nottingham Ningbo and Xi'an Jiaotong Liverpool University.

US universities began to apply in the recent years. NYU applied in 2011 and the Shanghai campus was approved last year. Duke University also got approval to start a university in Kunshan, a center of electronics manufacturing near Shanghai.

Chinese families who have saved for years for their children's education and want to send them overseas for an international education have become favored customers for universities in the UK, Australia, Canada and the US.

According to the Institute of International Education, 194,029 Chinese students were enrolled in American universities in the 2011-12 academic year, the No 1 origin of international students, almost twice India's representation, the No 2 source of foreign students to the US.

While many vice-provosts of US universities or even high schools go to China to attract students, some universities are looking for ways to set up campuses in China so students don't need to go overseas to get the caliber of education they're looking for.

The 145 international students from more than 40 countries and regions were also selected out of 3,000 applicants.

The annual tuition for international students is similar to NYU's standard in the US - $44,800. Chinese students pay significantly lower at 100,000 yuan ($16,000), but it is much higher than the standard tuition of 5,000 yuan for most of undergraduates at East China Normal University.

With China's economic growth and increasing importance in the world, many American students also showed strong interest in the Shanghai campus.

A student from Florida, who was only identified as Sara, told the Shanghai Evening Post that she likes the cultural diversity at NYU Shanghai.

"In American universities, there is also diversity, but the proportion may be 20 percent. In Shanghai it may be 75 percent and I can interact with many students from Asia," Sara said, adding that she wants to study economics and she believes the experience in Shanghai will be a big plus.

While foreign students are often assigned to live in a separate environment from local students in campus in other universities in China, Chinese and international students live in the same dormitory so that they become totally immersed in a cross-cultural environment.

Students pay 800 to 1,800 yuan each a month to share a two- or three-person dormitory room.

Taking on Sinophobia through education

China-US tourism gets a boost

Chinese could sit on Fonterra investigation

Chinese take a shine to fine china from UK