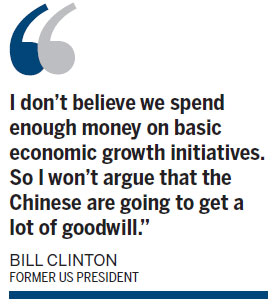 Former US President Bill Clinton believes that the United States and China should share the future instead of pursuing a "zero-sum game", especially in Africa.

Clinton made his comments while traveling with his daughter Chelsea this week in Africa, visiting Clinton Foundation projects.

While praising the good work done by the US government and private foundations in trying to build infrastructure for healthcare in Africa, Clinton pointed out that the US is lagging behind China in helping on infrastructure for basic economic growth.

"I don't believe we spend enough money on basic economic growth initiatives. So I won't argue that the Chinese are going to get a lot of goodwill," the 42nd US president told the British Broadcasting Corporation (BBC) early this week in Tanzania.

China has been a major source of funding for infrastructure projects in recent years, building roads, railways, bridges, stadiums and power plants.

A report by US-based AidData showed that China's official aid to Africa reached $75 billion between 2000 and 2011, close to the amount committed by the US.

"I don't necessarily think it's a bad thing for America if African countries appreciate both what we try to do to help their kids stay alive and what the Chinese do to give them better infrastructures and I think that we've got to try to create a future that we can share with the Chinese, not one where everything is a zero-sum game," said Clinton, who turns 67 next Monday.

As the first African-American president, Obama has been criticized by some for not paying enough attention to Africa. Critics say he has to do something major to compete with the African Growth and Opportunity Act (AGOA) and Emergency Plan for AIDS Relief (PEPFAR), legacy of former presidents Clinton and George W. Bush.

"He's had one or two other things to do, but I do think that he cares about Africa and I'll be surprised if he doesn't spend quite a bit of time on it in his last three years," Clinton said of Obama.

Xi promised that China will provide $20 billion in loans to Africa by 2015 in infrastructure, agriculture and manufacturing. He also said that each year China will help train 300 African managerial and technical personnel in the infrastructure field.

Zhang Jun, head of the International Economic Affairs of China's Ministry of Foreign Affairs, said recently that infrastructure is a key focus of China assistance in Africa.

China replaced the US four years ago as Africa's largest trade partner. Bilateral trade approached $200 billion last year, from only $10 billion in 2000.

Anthony Carroll, vice-president of Manchester Trade who had worked in Africa for over 20 years, said China's enormous amount of investment has played a very important role in Africa.

"The Chinese investment and loan assistance has gone into areas that the US has vacated for 15 and 20 years, large infrastructure projects, long term vision that they bring to projects I think has also helped Africa grow," Carroll said.

"China is borrowing from its wonderful development experience of bringing hundreds of millions of people out of poverty in the last 15 years," he said.

"They also bring with them a development experience which is more relevant to many of the African economies," said Carroll, adding that China understands many of the challenges Africa faces.

Patricia Aidam, a researcher from University of Ghana, said China is doing a great work in Africa, adding that loans with no strings attached are a good thing because not all African countries can meet the conditions set by Western countries for their loans.

The 'bad boys from Boston' are set to rock Shanghai

Exporters take heart from signs of US rebound